With the start of the 2014-15 academic year at WSU, in late August the Chinese Language Program sprang into action from its summer hiatus.  As a lead-off for the new season, the Chinese faculty invited a CET representative to address the opening session on recruiting WSU students to attend the CET academic programs in Harbin and Beijing, China in the coming year. Katherine Davis presented the essential information on CET programs with a slide presentation; she was followed by personal testimonies offered by students who previously attended CET Harbin and other China and Taiwan programs for learning Chinese. Judging from the lively Q&A that followed, we could see another group of motivated Chinese learners heading for Harbin, Beijing and Taipei come Summer 2015. On September 8, students and faculty celebrated the Mid-Autumn Festival (or the Mooncake Festival in the English-speaking world) at the Chinese Language Program. Professor Cao had prepared a choice assortment of mooncakes earlier and some students had done their share of preparation, i.e., getting ready to recite Chinese poems in praise of the sight of the brightest and fullest moon.  The celebration ended with a sing-along slide presentation of Chinese pop songs serenading romantic love kindled by the mid-Autumn Moon; it was played by a Senior student Hilary Sandberg, who is double majoring in Communication and Chinese.

Sandberg is in charge of organizing language-learning activities for the program. She has introduced a number of games which are easy to learn, fun to play and useful in practicing Chinese vocabulary and grammar. She has also led the core group of Chinese student faithfuls in promoting and eventually setting up a RSO affiliated with the Chinese Language Program. On October 27, the program held its own Halloween Party, which featured an interesting gala of cross-cultural costumes and face masks and was complete with exotic foods. The gala concluded with a simple and rotating ritual of carving the pumpkin. Xiaotong Lin, visiting instructor from the Confucius Institute, has started a series of viewings from the Chinese Culture DVDs entitled “A Bite of China,” aimed at getting the participants to practice speaking Chinese while watching DVDs.

This semester, the Chinese Table event, hosted by the Chinese Language Program every Monday evening in Honors Hall, has enjoyed a regular attendance of students eager to practice Chinese. The activity provides a casual, fun atmosphere for students to learn about Chinese culture and practice their language skills. 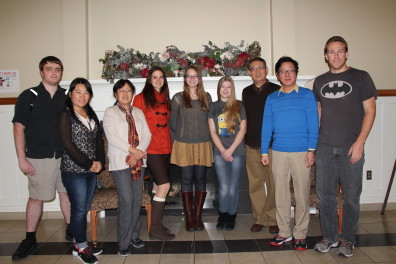 The organization’s mission is to foster relationships among Chinese language speakers and learners and promote cross-cultural understanding and collaboration on the Washington State University campus. Anyone interested in understanding more about Chinese culture, making new friends or learning the language can find more information on the Chinese Language Program Facebook page. 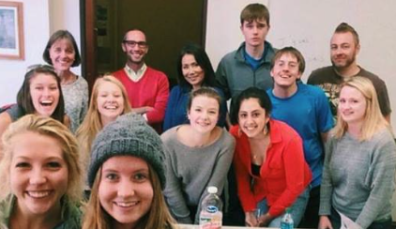 After more than 10 years of inconsistent activities, le Club Français has joined CougLinks and is proud to be an official Registered Students Organization, thanks to the enthusiasm and effort of a small group of dedicated students!

This semester’s activities included baking (and eating!) crêpes, game nights, movies, traditional French holiday desserts and decorating. The club is open to all, join us next semester! 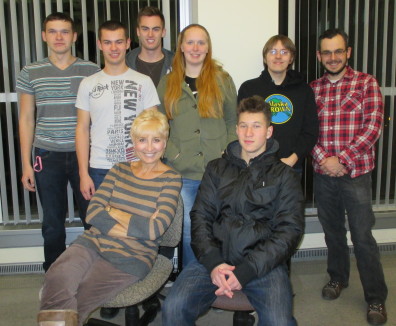 We are starting regular activities in the Russian Culture Club, and everybody interested in Russian movies, culture, food, history and literature are welcome to join. For more details about the club, contact the club chair Adrian Martin: adrian.martin@wsu.edu 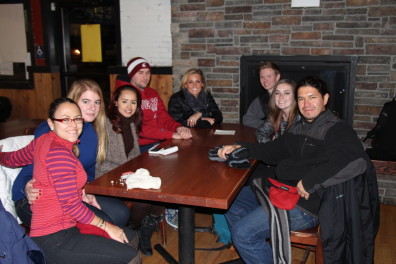 The Spanish/Latin American Club is available to those who are looking for ways to improve their Spanish fluency and that are interested in learning more about the culture. The club will be organizing cultural activities including salsa lessons, Mexican/Spanish foods, films, as well as provide the opportunity to meet new people and introduce the Spanish community. All are welcome to attend! Contact Edi Beltran for a schedule of club events: e.beltrandeherediac@wsu.edu

Wazzu Films is a Registered Student Organization that aims to provide students with film production training opportunities and exposure to independent films and professionals in the field, through workshops, lectures and the WSU Independent Film Festival. Jay Anafi served as 2013-14 president for the club, and the current president is Laura Guido. Rebecca Goodrich and Ana M. Rodriguez-Vivaldi are faculty co-advisors. The club is sponsored by the Film Studies Minor program in CAS which includes faculty members in CCGRS, DTC, English, Fine Arts, Foreign Languages, PPPA, and Sociology.

Wazzu Films had a successful 2013-14 academic year. Among many initiatives, a College of Art and Sciences’ Grants for Undergraduate Scholars funded a faculty-mentored project titled  ”From Script to Show: Engaging in All aspects of Independent Filmmaking.” 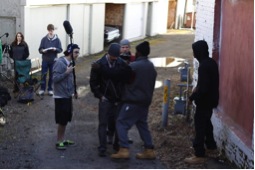 This project brought together students from various CAS Departments who are active members of Wazzu Films, under the direction of Jay Akins (President) and Calum Akins (Chief Financial Officer), to engage in the various aspects of film production, from the writing of the script to the final showcasing of the film. The project entailed a step-by-step initiation into writing and production of a short film that would provide students with an experiential learning opportunity in the art of independent filmmaking. It began with a workshop on Oct. 15, 2013 on “Scriptwriting 101,” presented by Rebecca Goodrich on. This was followed that same night by the launching of the microfilm script competition which ran through Oct. 25, and resulted in several submissions. A panel of WF officers and the advisors selected the winning script: “The Hypnotist.”

A second workshop on the ‘Basics of Production’, was led by Jay Anafi and a team of WF officers on Oct. 22 in CUE 216, with 20 students in attendance. These two workshops provided the framework for the pre-production activities:

or go to ASK, the College of Arts and Sciences Undergraduate Online Journal.

In the meantime, a second production began in late March with a longer script titled “Structure” written in collaboration by a group of WF students. By mid-April, the group had filmed two main scenes and had about three days of shooting left. However, they had some delays when the 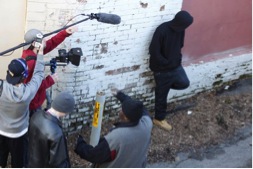 lead female actor had to quit the production, among other issues. In addition, weather conditions on weekends when filming, has caused additional delays. This is frustrating but quite reflective of actual work conditions in the film industry, so it adds to the students’ experience. Even though the expectation was to complete production before June 1, the rest of the production may extend over the summer, and may include some shooting days on the west side. The plan is to edit alongside as much as possible, and to hopefully have a final print ready for a mega premiere in the fall.

The group is still looking for original music composition for the film as most of the tracks available online are expensive. They are approaching some of the RSOs in the School of Music to look into potential collaborations for this project.