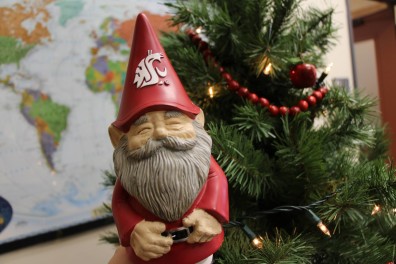 The Department of Foreign Languages and Cultures is excited to bring you our December 2014 newsletter. This year DFLC has been incredibly proactive in our efforts to enhance curriculum, diversify education and contribute to WSU’s vision of global learning. We have participated in community engagement efforts across campus to build relationships with campus organizations and local businesses to support their values of inclusivity and appreciation for cultural diversity. This newsletter is a compilation of stories and updates from all sections within the department.

Letter from our Chair

Whether it be new study abroad programs and university connections in countries such as Chile and Germany, successful sabbatical applications, peer-reviewed publications in world class publishing houses and journals, new tenured faculty applications, successful conference participation, scholarship and grant applications, or increased innovation in the classroom, the Department of Foreign Languages and Cultures at WSU is pushing the boundaries of research, teaching, and service in new and intriguing ways. Read more

Check out what the department has been up to including office news, the Humanities Planning Group, social media, and student spotlights. Read more

Many great things are happening in the Language Learning Resource Center this fall. We have new services to offer, new equipment, and big changes planned for the Department website. Read more

The fifth edition of the French Film Festival opened on October 7 at the Kenworthy Performing Arts Centre. After an opening reception of French wine and cheese, the co-organizers, Sarah Nelson from the University of Idaho and Sabine Davis from the Department of Foreign Languages and Cultures at Washington State University, were delighted to introduce to a record audience of 241 students and community members. Read more

The German faculty is united in their commitment to encouraging the study of German in country at all levels of their program. Read more

Russian has been very popular during the Fall 2014 semester with more than 30 students enrolled in Rus 101. We will be welcoming back both Rus 105 and Rus 205 next semester. Sergey Lapin, Clinical Associate Professor in the Department of Mathematics, has volunteered to teach the conversational courses and says he is anticipating a high enrollment in these courses. Read more

Last April, as one of the founders thirty years ago, Professor Francisco Manzo-Robledo was invited to give two talks at the Instituto Tecnológico de Chilpancingo, México. The topics were: 1)”Del romance español al (narco) corridor mexicano”, dealing with how Mexican corridos as products of Mexican culture, constitute a code for macho behavior. 2) “Tumulto del pulque de 1692”, dealing with Sor Juana Inés de la Cruz, the Viceroy and the Catholic Hierarchy during the fatal events of the indigenous uprising in the city of México and Tlaxcala a week after. Read more

The Film Studies Minor program executive committee, coordinated by Ana M. Rodríguez-Vivaldi, submitted a series of revisions that have been partially approved, including extending the minor to both WSU Vancouver and the Global Campus. Read more

The Department of Foreign Languages and Cultures is proud to announce it has five active clubs, who with the help of dedicated students and staff have become Registered Student Organizations. These clubs host events open to campus and the Pullman community to educate others on a variety of cultures and languages. Read more

Both WSU Tri-Cities and WSU Vancouver have seen a growing interest in language courses. New courses are being offered as they anticipate an increase in enrollment. New opportunities have risen for students at any WSU campus to earn credits abroad. Read more