Los Pacos is a musical group formed by aficionados that believe in singing as a language and cultural learning tool. This spanish conversation course meets once a week and is geared toward helping students practice the language through singing and playing instruments. 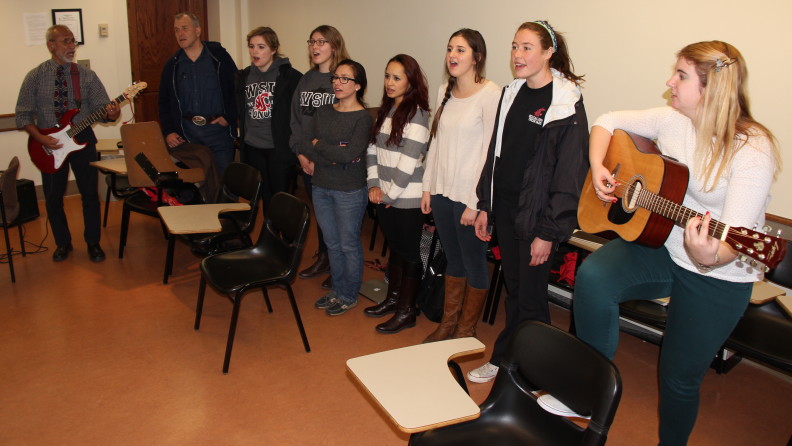 This year, the original students consisted of four girls, thus the renaming of Los Pacos to Las Panchas. Throughout the semester we have had many eager undergraduate and graduate students join our quartet turning it into a lively band of students and faculty. On April 10, Las Panchas will perform their arrangements at the 2015 Department of Foreign Languages & Cultures Awards Ceremony.

Join us Fall 2015 for Spanish 450, “The Multiple Voices of Latin American Women.” The updated course will cover outstanding Latin American women in poetry, fine arts, popular music, theater, narrative, film, and more. Spanish 450 is taught in Spanish and fulfills the writing in the major requirement. The class will meet Tuesdays and Thursdays 2:40-4:05 p.m. in Thompson 215.

Dr. Michael Hubert was awarded tenure in March 2015 and will be promoted to the rank of Associate Professor in August 2015. During 2014, Professor Hubert published two peer-reviewed journal articles and had one peer-reviewed book chapter accepted for publication. Additionally, he delivered a scholarly presentation related to his book chapter in Panama City, Panama in July 2014. Lastly, Professor Hubert was awarded a fellowship from the WSU Humanities Planning Group in early 2014.

Professor Hubert’s article entitled, “Evaluating the Role of Writing in the First and Second Year Foreign Language Curriculum,” currently appears in the Journal of Education and Training Studies, and his other article, “Patterns of Avoidance in U.S. University Spanish-Language Instruction,” appears in the International Journal of Applied Linguistics. His book chapter, “Teaching Translation to Foreign-Language Majors,” will appear in the first ever volume on the teaching of translation to be published by the Modern Language Association. Professor Hubert also delivered a scholarly presentation, “Teaching Translation to Foreign Language Majors,” at the 2014 American Association of Teachers of Spanish and Portuguese (AATSP) Conference in Panama City, Panama in July of 2014.

Professor Hubert was awarded a $12,400 fellowship from the WSU Center for the Humanities in April 2014, which will allow him to conduct a 4-year longitudinal study of the development of speaking and writing proficiencies among WSU foreign language students that will run from 2015 to at least 2019. Professor Hubert delivered an address based on the initial aspects of this study entitled, “The Development of Speaking and Writing of Foreign Language in Academia,” in April 2015.

Professor Hubert continues to work on his longitudinal study of speaking and writing proficiency development, as well as several other related articles projects to be completed during 2015. In addition, he will present a scholarly paper entitled, “The Development of Speaking and Writing in the Foreign Language Spanish Classroom: A Large-Scale Empirical Study,” at the 2015 AATSP conference in Denver, CO. 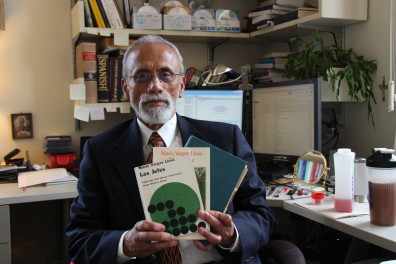 In 1966, Dr. Wolfgang A. Luchting came to WSU to teach as a Spanish professor. As a German native, Dr. Luchting was an extremely diverse individual who mastered the Spanish language among many others. At the time, he held the title for most publications at the university. He believed in the power of communication through literature. Dr. Luchting is remembered as an extraordinary researcher, demanding professor, and world traveler. With his renowned skills in both Spanish and German, Dr. Luchting became the official German translator for Peruvian writer Mario Vargas Llosa, who visited WSU in the late 1960s.

Over the course of a single semester, Llosa became a Writer in Residence and gave many seminars and lectures in Spanish. During his time at WSU, Llosa continued his writing and was awarded later on with the Nobel Prize in Literature in 2010. Llosa is recognized as a famous writer among Latin American literature and is known to be a generous and interesting man. After Dr. Luchting passed away on January 1, 1999, many of his books made their way onto the shelves of our current Spanish professors. Recently, professor Francisco Manzo-Robledo found books written by Llosa with dedications made to Dr. Luchting. “They [the books] are like a piece in a museum—you can find his books all over, but these are valuable because they are dedicated to a professor here,” says Manzo-Robledo. The books will be donated to the WSU Holland and Terrell Library for students to check out and review.