The Japanese Program is excited to announce a new major in Japanese beginning in Fall 2015. The new B.A. follows other foreign language programs in offering students a choice between a standard Japanese Language and Culture major (34 credits) and a Japanese for the Professions Major (25 credits; second major only). The Japanese Language and Culture degree option prepares students to enter the teaching profession and/or continue their study of the language at the graduate level. Japanese for the Professions offers a skills-based, proficiency-oriented second degree option that prepares students to communicate in Japanese in professional settings. This new major focuses on both language proficiency and intercultural proficiency to provide students entering today’s global, diverse workplace with the communication skills necessary to work effectively within and across different language communities, increasing their employability. For more information, visit the Japanese Program website. 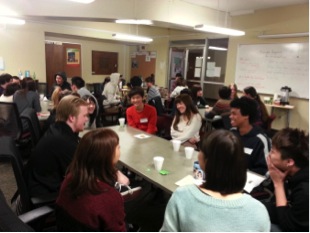 This, they recognized, was a rare opportunity to apply the skills they had honed in their Japanese classes while interacting and forming friendships with foreign peers. Course time was devoted to in-class conversations, cultural understanding and critical thinking activities, special projects, and excursions to local sites and events. Students described the experience as tough but enjoyable, intense but rewarding. And they rose to the challenge. “I’ve never seen WSU students so completely involved and dedicated to anything as much as these students were,” said Rob MacAuslan from WSU’s Intensive American Language Center. “I was incredibly impressed by these students’ complete commitment to the program from start to finish.”

The 2-credit course was the result of collaboration between the American Cultural Exchange of Japan, IALC director Pamela Duran, and Puck Brecher, Associate Professor of Japanese at WSU. It was co-taught by bilingual course specialist Deborah Connell, who teaches for the Union County Public Schools in Monroe, N.C., and IALC instructor Reho Abo. Course collaborators responded to students’ acclaim and enthusiasm by offering the course again during the first two weeks of Fall 2013, and then again in Fall 2014. Fall semester offerings overlapped with regular classes, forcing students to balance their regular course load with three additional hours of Japanese every day. Students have consistently responded enthusiastically. Some have found the experience so rewarding that they plan to take the course again when it is offered in Spring 2015.

The Japanese Program has established an exchange partnership with Mukogawa Women’s University in Nishinomiya, Japan. The partnership grants eligible WSU students full scholarships to study at MWU for a summer, semester, or full year.

On Dec. 7, 2014, three WSU students will be travelling to Seattle to take the Japanese Language Proficiency Test.