The Japanese program is excited to announce that beginning Fall 2015 it will be offering a major in Japanese Language and Culture, and Japanese for the Professions (second major only). There will be information sessions for interested students early in the fall (details TBA). In addition to the usual complement of Japanese language courses, in Fall 2015 JAPANESE/ASIA 123 Modern Japanese Culture [HUM] will be added to the course offerings. Visit the Japanese program website for more information about degree programs and course offerings.

The Japanese language students have been exceptionally active this year. Last December six students (the largest contingent yet) traveled to Seattle to take the Japanese Language Proficiency Exam. At least one passed intermediate-advanced level N2. An unusually large number of Japanese students are applying for study abroad this year, and three seniors have been invited to interview for the Japan Exchange and Teaching (JET) Program. One student has applied for a prestigious Boren Scholarship, and one was accepted to Middlebury’s Summer Language Institute for Summer 2015.

Additionally, the Japanese 308 classes have been corresponding with a group of Japanese exchange students at the Mukogawa Fort Wright Institute in Spokane through an informal pen-pal program. A large group of those Mukogawa students are scheduled to visit WSU Japanese classes at the end of April.

Japan program faculty have also been productive this year. Assistant Professor Kota Inoue presented a paper entitled, “Kenji Miyazawa’s Anthropomorphism and Landscapes,” at the 2015 Annual Convention of the Modern Languages Association in Vancouver, Canada in January. His essay, “Uneven Space of Everyday Modernity: The Colonial Logic of the Suburb in Tanizaki Jun’ichiro’s A Fool’s Love,” will appear in the June issue of Japan Forum. Associate Professor Puck Brecher, on professional leave, is working on a book manuscript provisionally titled “Honored and Dishonored Guests: Caucasians in Wartime Japan.” He also has a book chapter titled, “Being a Brat: The Ethics of Child Disobedience in the Edo Period,” forthcoming in Values, Identity, and Equality in 18th- and 19th-Century Japan (Brill, 2015).

The Japanese-Language Proficiency Test is offered by Japanese government agencies since 1984. It is the largest proficiency test on Japanese in the world and known as one of the most reliable means of evaluating the proficiency of Japanese learners. The original 4-level structure was recently revised into 5 levels, from N1 (the highest level) to N5. Most Japanese universities require at least N2 for foreign students wishing to be admitted. The test is administered all over the world, but our nearest testing site is Seattle and the test is usually held only once a year in early December, at the end of fall semester. The distance and the timing naturally make it difficult for our students to take it, but this past December six of our students got together and took the test. Japanese student Patricia Duell, who shares with us her experience, took N3 and passed. There were others who didn’t pass their desired levels, but their scores were all so close to the threshold and they all say they will be back in Seattle this December to retake the test.

I was not initially planning on taking the JLPT this year, but after finding out that a bunch of my friends were going to take it, I decided that I would have a go at it too. I wasn’t as consistent as I wanted to be in studying for it, but I did manage to do a little each week. I mainly studied kanji and grammar. I did very little studying on the reading part, which is probably why I struggled the most on that section. I looked online for ways to study the grammar points and I found this great YouTube channel called nihongonomori. The channel was made by a bunch of students at Waseda University in Tokyo, Japan, and they make lots of videos on the grammar specifically needed for the JLPT. I watched a lot of these videos and used them to help me study. 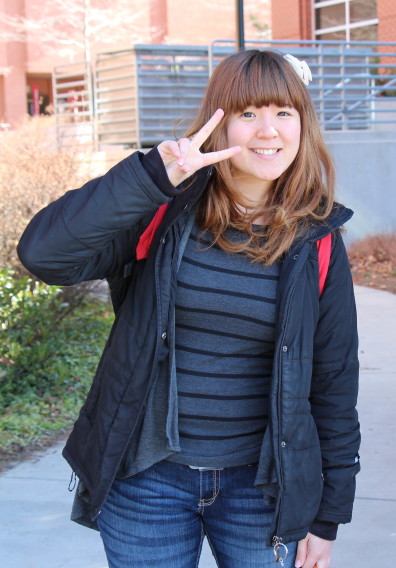 I took the JLPT 4 back in 2009 when there were still only 4 levels and passed. I also often listen to Japanese music and watch dramas with subtitles along with speaking practice with my Japanese friends on Skype or LINE. This is probably what helped me get a perfect score on the listening section.

The experience of the test itself wasn’t too bad. I got a ride to Seattle with some friends and stayed at a friend’s house who was also taking the test. The test wasn’t too bad except for the part that I didn’t really study for, which was the reading part. This is also the section that I scored the lowest on. I wasn’t sure if I studied enough to pass, so I was pleasantly surprised when my results came out. I made it through all the sections with time still left over. Sometimes I think I finished too quickly, which allowed me to go back and look over my answer, but it also kind of made me second guess my answers that I had initially put in. Altogether it was a good experience, and I would like to take the JLPT 2 this winter.