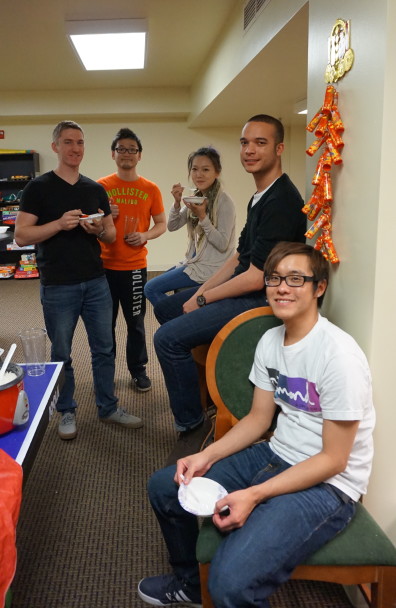 Chinese New Year has come and gone once again. Based on the lunar calendar, the new year falls each year somewhere between late January and late February. This year’s Chinese New Year occurred on February 19. Celebrations were conducted by various student organizations throughout the week. WSU’s Chinese Language Program and Project Pengyou, a student organization with the mission of fostering communication between the people of China and the U.S. and supporting American students interested in studying abroad in China, presented a Chinese New Year party on the evening of Monday, February 16, an event that was open to anyone with an interest in Chinese language and culture. The event began with a potluck of various foods, both Chinese and Western. While attendees enjoyed the assortment of foods and beverages, Professor Xinmin Liu taught everyone how to wrap homemade dumplings, which were later fried and shared with the group. Later on in the evening, two students from the Chinese program shared their recent experiences studying abroad in China. They presented slideshows and answered questions about program recommendations, food suggestions, and rewards and challenges of studying in China. The event concluded with several Chinese-style games. 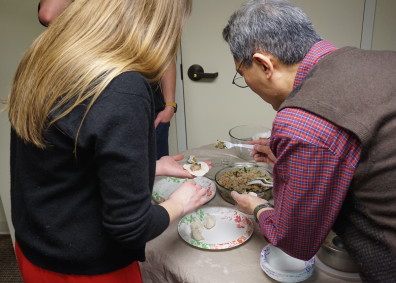 The first involved attaching a balloon to your ankle and then trying to stomp on and pop other’s balloons while protecting your own. The second game involved trying to blow out a lit candle by speaking a Chinese word in front of it. The final game was a chopstick race. The first team to use chopsticks to transfer a handful of candies through each teammate’s bowl won. Winners of each game received a special Chinese prize provided by Instructor Lin. It was quite a special Chinese New Year for all of us in the Chinese Language Program and Project Pengyou, and we wish everyone a happy and prosperous year of the goat!

The French Club will have two activity nights this semester as part of the Dinner and a Movie series, where students will have the chance to cook a French specialty before a movie showing.

The first event was on March 2, which included gougère, a savory choux pastry followed by a screening of “Intouchables.” This comedy-drama film follows the true story of the unusual friendship that develops between a quadriplegic and his caretaker.

The last event of the semester will be held on April 15 with chocolate fondue and “Le Dîner de Cons.” This comedy follows a group of friends who compete to bring the most foolish guest to their weekly dinners.

Join us for the last Dinner and a Movie in Honors Hall Lounge from 5:30-8 p.m.

The Russian Culture Club has kept busy this semester with a variety of activities. Students watch Russian movies, participate in conversations to practice the language, and enjoy Russian treats from a Russian store located in Spokane. Discussions include political issues, special topics of interest, and cultural items. The club meets in the CUE at times that best fits attendees’ schedules.

The Spanish/Latin American Club is actively working to promote Spanish and Latin American culture by engaging in activities and conversing over a variety of topics. The club usually meets at restaurants where attendees can eat traditional foods, such as tacos, tortillas, and quesadillas. Their biggest goal is to practice speaking skills with students with the help of native speakers. Check the department social media for upcoming meetings!