On the night of September 27, 2014, the Chinese-speaking community at WSU and around the Palouse area enjoyed a breath-taking performance of traditional Chinese Music by Chinese students from Nanjing, China at the Gladish Community Center in downtown Pullman, WA. The visiting troupe of traditional Chinese music brilliantly showcased a diverse and elegant repertoire played on a medley of traditional instruments rarely seen in this area of Inland Northwest. 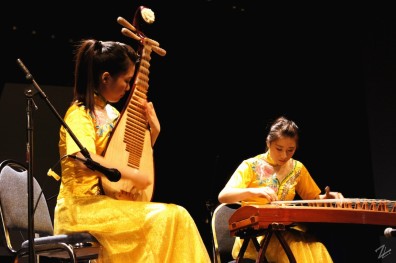 The evening’s program they presented included many of the renowned works such as “The Jasmine Flower,” “Birdsongs in Echoing Mountains,” and “a Horse Race on the Grassland.” The ensemble was led by Zhang Jingbo, Professor of Performing Arts, and consisted mostly of students and faculty at Nanjing University, one of most prestigious universities in China. The visit was sponsored by the Traditional Chinese music performanceConfucius Institute of the Washington State and has since been considered a well-received and highly successful cultural event for the WSU campus and Pullman community.

Preparations for the performance started back in June 2014 involving Chinese faculty members of the Department of Foreign Languages and Cultures at WSU. Dr. Liu Xinmin and Professor Cao Weiguo spent numerous hours contacting the Gladish Center, inspecting the auditorium, and renting the needed music equipment and stage property. At the time of the performance, Ms Lin Xiaotong, a Chinese teacher sent to WSU by the Confucius Institute, organized a team of Chinese students as stage hands, auditorium ushers and security staff.

The combined effort of her coordination of student assistance, and Dr. Liu’s direction of the sound and lighting crew at the electronic controls provided the indispensable key—a well-operated and smooth-running stage—to the rousing success of the ensemble’s success. Photo courtesy of Zoe Lin.

Christopher Lupke has had a busy year. He was promoted to full professor. He’s continuing to work on the development of a Center for the Humanities at WSU. He won an NEH grant to participate in a summer seminar on Daoist religion and history for college professors at the University of Colorado. He spent most of May and June at Henan University in China as an Honorary Visiting Professor. His research project is on the Confucian notion of “filiality” as it is represented in modern and contemporary Chinese literature and cinema. He is also finishing a book on the Taiwanese filmmaker Hou Hsiao-hsien (Cambria Press) as well as two co-edited volumes, one on Chinese poetic modernisms (Brill Press) and another on interwar modernism and urban conflict (Routledge).

Lupke is also currently serving as the Fulbright Visiting Research Chair in East Asian Studies at the University of Calgary in Canada. His research project is on the topic of filiality in modern and contemporary Chinese literature and cinema. Filiality is a pillar of Confucian ethical thinking that informs one’s respect and reverence for parents, consanguine elders and ancestors. An appreciation of it is critical to understanding intergenerational relations in China and throughout East Asia. Although much scholarship has been written about the pre-modern notion of filiality in intellectual history, philosophy, religious studies, and women studies, as well as in sociology, anthropology, demography and population studies with respect to contemporary Chinese culture, there exists no book-length work that explores how filiality is represented in modern and contemporary fiction or film. By appropriating liberally from these various other disciplines and epochs, Lupke’s project seeks to produce a systematic investigation. While in Canada, he is teaching an advanced seminar on the topic, conducting archival research, and giving a series of public presentations, both at the University of Calgary and at other institutions there, including the University of Toronto, the University of British Columbia, and the University of Alberta.

This is her fourth year teaching Chinese in the department, and the list of admiring students, appreciative colleagues and deserving accolades has grown tremendously. In the fall semester of 2011, Instructor Xiaotong, originally from Sichuan University in Chengdu, China, was assigned to teach Chinese as part of the Mission of Confucius Institute, a government-sponsored educational exchange between China and US.

Prior to her joining the Chinese Program at the department, she had taught Chinese in France, South Korea and Arizona, US, and had garnered abundant experience and expertise in Teaching Chinese as Second Language. Since her arrival at WSU, she has participated actively in teaching oral courses at all levels, assisted in teaching Chinese 203 and 204.  Her teaching of speaking classes has consistently won positive feedback from students and earned respect and admiration from her colleagues in the department. She has also participated in annual conventions of WAFLT and ACTFL in and around the State of Washington.

With her excellent cooking skills, she has not only supplied the Chinese equivalent of “Mom’s Cooking” numerous times for the weekly Chinese Table, but has also organized students to perform short and entertaining skits of singing, acting and recitations for the celebration of traditional festivals at Chinese Table.