Dr. Michael Hubert published a peer-reviewed article this year titled, “Using Writing to Teach Pronunciation: An Experimental Fourth-Year University Spanish Phonetics/Phonology Course.” This article will appear in an upcoming issue of the Defense Language Institute’s Applied Language Learning journal. It details an advanced writing course here at WSU in which students complete a formal study of the sound system of Spanish. Dr. Hubert is currently working on a longitudinal study of the development of the speaking and writing proficiencies of foreign language learners at WSU. He is also developing a survey of foreign language instructors from across the U.S. on their classroom practices involving writing in a foreign language.

In June, Dr. Vilma Navarro-Daniels gave a talk on New Chilean Cinema. Dr. Navarro-Daniels was invited by the School of Social Work at Pontificia Universidad Católica de Chile. Her presentation took place on Campus San Joaquín, in Santiago, Chile. The lecture was about Dominga Sotomayor Castillo’s De jueves a domingo (2012) as a clear example of a film that, in spite of being deeply focused on private and intimate topics, is able to address the consequences of the imposition and implementation of both multinational capitalism and individualistic and compulsive consumerism in Chilean post-dictatorship society. By employing a postmodern aesthetic, the film deliberately eludes any historical reference and, by doing so, subscribes a recent trend in Chilean film, which avoids political and social issues. However, the film cannot keep away from a critical reflection on an economic system that demands the loss of historical memory and the imposition of political oblivion. The theoretical frame included Fredric Jameson’s theories about postmodernism and late or multinational capitalism, Mircea Eliade’s notion of myth, and Betriz Sarlo’s analysis of postmodern Latin American societies, particularly her views about the shopping center.

Students and faculty gathered to watch the film The Book of Life in celebration of El Día de Los Muertos. The DFLC co-sponsored the event with the WSU Office of Equity and Diversity, Multicultural Student Services, and Movimiento Estudiantil Chicano de Aztlàn (MEChA). The department helped provide food and refreshments for the event. Almost 100 students attended the movie night.

Making farolitos, little lanterns, is a tradition in El Salvador and Colombia for El Día de los Farolitos. People celebrate this holiday by placing candles in paper lanterns on windowsills, balconies, sidewalks, and streets. This was a traditional Catholic holiday, but is now celebrated by many in Latin America. Instructor Sonia Lopez-Lopez keeps this tradition alive in her Spanish 204 classes. 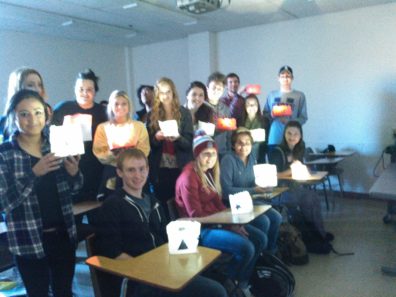 Reviewing essays in Spanish 204
Sonia Lopez-Lopez meets individually with all of her students about their final papers. “I really enjoy meeting one on one with the students. I think they learn more about the writing process and how to organize their papers. They can then produce really good work to use for the junior writing portfolio,” Lopez-Lopez said. 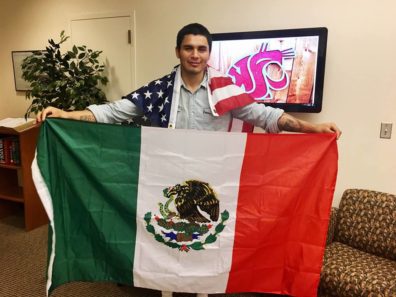 “Pick up words from another language, it’s the best way to learn.”
–Eduardo Castañeda Díaz (right), senior studying Spanish and Criminal Justice. Eduardo plans to use his Spanish skills to become an immigration lawyer. 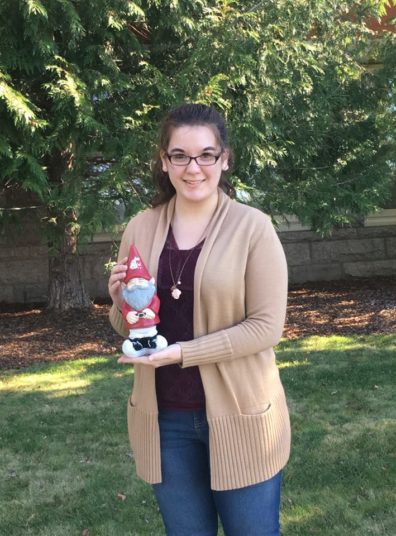 Meet our #GnomeHomie Katie Lattin (left), a sophomore majoring in Spanish. She plans to use her Spanish education to be an interpreter for Spanish speakers. Katie plans to study a broad somewhere in Latin America to improve her Spanish dialogue and connect with people.

“Being able to speak Spanish allows me to embrace the language and multiple cultures and connect with people that I otherwise wouldn’t be able to. I recommend others to study a language because it’s beneficial for job opportunities and it allows you to communicate and connect with twice the amount of people on a personal level.” -Katie Lattin 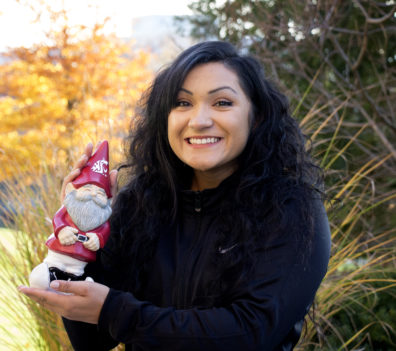 Why are you taking language classes?
I am constantly trying to improve my native language.
How do you think your language skills will help you after WSU?
My language skills will shape me into a better communicator among the fastest growing minority group, the Latinos. It will also help me as I study abroad in Costa Rica for my final semester of undergrad.
What advice would you offer to others who are interested in learning a foreign language but nervous about doing so?
I would recommend that they start early. There is so much to learn about another language. My mother often tells me, “We are not born taught.” Her quote helps me and hopefully other students to not be afraid of trying something new. If we knew it all we would not be students. Be sure to follow your passion because there are many people who are willing to help you along the way.