Since summer 2014, Dr. Xinmin Liu has accomplished a list of things that helped mark this passing year as a “milestone” in his scholarly career. Its highlights were many: following the publication of his book Signposts of Self-Realization (Brill, March, 2014), his research activities kicked into high gear with a flurry of activities: In late June, he traveled to Taipei, Taiwan to attend a graduate seminar named “Ecology in Development” hosted by the English Department at Tamkang University, and on July 1, he delivered the keynote address “The Picturesque and the Human-Land Affinity” to that seminar.  In September, the special cluster of English articles he had collected and edited under the title of “Manufactured Landscapes in China” was published by the journal Forum for World Literature Studies, Vol. 6, No. 3, September 2014 (Shanghai Normal University, China and Purdue University, USA). The cluster included his “Preface” and his full-length article “Ethical Dilemma in ‘Documenting’ Manufactured Landscapes in China.” 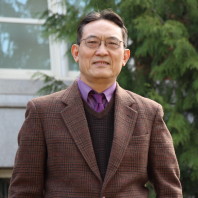 In the meantime, Dr. Liu had been collaborating with Geraldine Fiss (a Postdoctoral Asianist at USC) to organize panels under the theme of “Ecoliterature in East Asia” for the annual convention of RMMLA at Boise ID. When the project eventually materialized on October 10, there were three back-to-back panels with a total of 12 panel papers including his own “Accessory or Autonomous? The Enigmatic Landscape in China’s Recent Ethnic Films.”

More recently, he organized another panel for the 2015 Convention of MLA held in Vancouver, BC on January 9, 2015 and also presented a panel paper with the title “Re-enchanting the Picturesque: Wang Shu’s Ethical Choice of ‘Building a House’.”

On March 28-29, he joined a group of international scholars in a two-day seminar at the ACLA (American Comparative Literature Association) in Seattle, WA and presented a seminar paper named “Situating Ecophobia in Landscape Aesthetics: The Tussle between ‘Cosmological Oneness’ and ‘Psychological Distancing’.”

Dr. Liu looks forward another busy summer in which he will first co-lead with Dr. Simon Estok (Sungkyunkwan University, Seoul) a pre-convention seminar entitled “Ecocriticism in East Asia” at the 11th Biennial Convention of ASLE (Association for the Studies of Literature and Environment) at the University of Idaho, Moscow, ID, and will spend the rest of the summer completing his manuscripts for his upcoming book named Agential Landscapes and Human Conduits: Aspects of China’s Ecocriticism.

The Chinese Language Program is the feature extra-curricular activity for the Chinese program. It is held once a week every Monday night in the Honors College. Participants include Chinese faculty, students who are currently studying Chinese, and native Chinese speakers. The Chinese Table offers an unique opportunity for students to practice speaking Chinese outside the classroom, to make friends with Chinese people, and to learn more about China.

On March 9, the Chinese Table hosted a special study abroad information session. During the session Ms. Katherine Davis, a representative from the CET study abroad program, gave students a talk about the CET program. Two students, Lucas Grisham and Juan Mata, who studied at CET in the past, also talked about their study abroad experience at CET. CET is an elite Chinese immersion program with locations in Harbin, China, among other sites.  Students who attend CET must sign a language pledge that they will solely speak Chinese for the duration of the whole program. Many of the students in the Chinese program have gone to study at CET in the past and they have all made tremendous progress in their Chinese study. This spring, four students in the Chinese 204 class are planning to study at CET for the next academic year. One student wrote the reason she chose CET is because the, “program offers immersion in the Chinese language, requires a language pledge, and provides rigorous and personalized coursework that I believe will be the most beneficial in my goal of achieving language fluency.”

Read more about the Chinese Language Program and other events they held this semester!