Our department, in collaboration with the International Programs’ International Center, continues to offer a series of free, hour-long “conversation tables” held on campus. Students are able to practice their language speaking abilities at all levels of mastery. Each of our nine language programs host this event each week in the CUB, which adds an additional level of support for our language learners.

Combine that with the weekly tutoring support offered through the Language Learning Resource Center (LLRC) by native or near-native speakers, and you can see why our students love to study foreign languages and cultures at WSU! We strive to enhance our students’ learning through multiple, diverse opportunities to ensure they have their best chance at success in our programs. We hope you enjoy this glimpse into our daily learning experiences in the classroom!

Throughout the semester, students are tasked with a variety of activities to solidify learning goals and objectives. This semester, students in 100-level Arabic classes were asked to create and act out a scenario speaking only Arabic during class. The goal of this activity was to incorporate colloquial Arabic (Egyptian or Syrian) using the words, phrases, and grammatical structures that they have learned in class.

First semester Arabic students learn the fundamentals of speaking, listening, reading, and writing.  Arabic 101 is a language course designed for non-native speakers with no or little previous background knowledge of the Arabic language and culture. The course is proficiency based, covering all four language skills (speaking, listening, reading, and writing).

By the end of the semester, students are expected to have mastered the Arabic alphabet; to be able to read simple texts using a limited range of vocabulary and structures; to deliver and address about oneself with others in Arabic; and to engage in limited conversations with classmates, instructor, and native speakers. Students also develop an acquaintance with some aspects of Arab culture through the exploration of Arabic-language media and Arabic-related websites.

At the end of the semester, during “dead week,” Instructor Manal Shaheen threw her Arabic 101 class a party, including authentic Egyptian food and dancing to traditional music. Teaching the students a few simple, traditional dances was the president of MESA, the Middle Eastern Student Association at WSU.

Instructor Shaheen actively participates in MESA activities, and, in turn, the MESA students come to her classes to teach her students about the Arabic language and a variety of cultural traditions. Relationships like these create lasting memories and success in the classroom for our students!

Drs. Xinmin Lui and Lydia Gerber of the Asia Program co-led a group of 10 students on a field trip to the Kam Wah Chung and Co-Heritage Site in John Day, Oregon. This trip offered students a rare opportunity to visit the historic building once owned by two Chinese immigrants who provided healthcare, food, room, and board for Chinese laborers working in the gold mines during late 19th and early 20th centuries.

Students closely viewed the exhibits in the building; carefully examined records archived at the Interpretive Center; and are now together writing a journal as part of the requirement for the trip. This experience inevitably left a lasting impression on our students and significantly enhanced their learning of culturally significant historical landmarks.

In early December, 100- and 200-level German students were invited to a night of German improvisation presented by our very own German 307 students. The presentations were spoken only in German, and the students proudly displayed all that they have learned throughout the semester.

During dead week, Instructor Sere Previto offered her students a chance to prepare their very own, authentic Italian tiramisu by following her recipe. Instructor Previto is a native Italian and indulges our requests for her delicious tiramisu throughout the year. It is truly a treat to enjoy this beloved Italian dessert!

The Japanese program always welcomes visitors in their classes, especially native Japanese speakers! Students were able to communicate with our 17 visiting students from Japan in September by answering their questions in Japanese and understanding their presentations in Japanese. 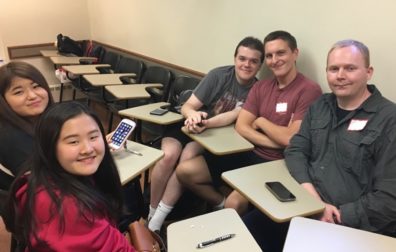 The group of 17 Japanese students visited two classes of Japanese 203. The visiting students are English majors from Mukogawa Women’s University in Nishinomiya, Japan who are currently studying English at Mukogawa Fort Wright Institute in Spokane.

Students from both WSU and MWU participated in several dual-language activities, being allowed to speak in their target languages only. This allowed students to help each other create correct sentences. 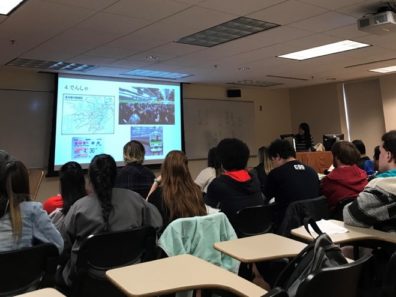 The visit from the MWU students was both inspiring and motivating for our students. Our students used the language abilities that they have been perfecting for one to three years and experienced being understood in a foreign language by native speakers. It was a very memorable visit!

In October, Japanese 203 classes had a unique opportunity through another visitor. Hikari Fukase is an exchange student from International Christian University in Mitaka, Japan. She gave a presentation about a day in the life of a Japanese high school student, entirely in Japanese. This made it a bit challenging for our students, but most understood the majority of the presentation, which gave them confidence in their language skills. The students loved this opportunity to learn more about Japanese culture!

In early December, Korean students were invited to attend the International Film Showcase Series‘ showing of the film “Helpless,” a mystery thriller about a man who searches for his missing fiancee after she disappears before their wedding. Our students enjoyed the opportunity to meet with other students to learn more about Korean culture through film.

Professor Vilma Navarro-Daniels showcased Andrés Wood’s film Violeta Went to Heaven (Violeta se fue a los cielos) in honor of Violeta Parra, late Chilean composer, songwriter, singer, poet, visual artist, and social activist. Dr. Navarro-Daniels is also from Chile and has long admired Parra. The movie night was a big hit with the students, and we had a full house!

After the movie, students engaged in a discussion as part of this cultural activity with Dr. Navarro-Daniels on topics such as gender, politics and society, art, symbolism, and what each student learned about Violeta Parra that is meaningful to their own lives.

Mike Chavez, a second-year graduate teaching assistant, presented his students with insight on Dia De Los Muertos (Day of the Dead). Students enjoyed making papel picado by creating colorful skulls and writing stories about their loved ones who have passed away. This Mexican tradition is celebrated annually at the end of October.

Priya Panday, a first-year graduate teaching assistant, invited our office assistant, Daniel Liera-Huchim, a native speaker of Spanish, to teach her 100-level Spanish students how to do a little cumbia and merengue dancing. Priya wanted to teach her students about the importance of body language in dancing and how it influences Latin American culture. Students also enjoyed various foods from Latino cultures.