Associate Professor of Chinese Xinmin Liu was invited to edit a special issue of the English language journal Tamkang Review, a prestigious journal in East Asia. The issue was published in early July and features a critical essay by Kota Inoue, assistant professor of Japanese at WSU, who died suddenly following a car accident last December. Inoue’s PhD advisor, Jim Fujii, was honored to posthumously edit this special article written by his late student. 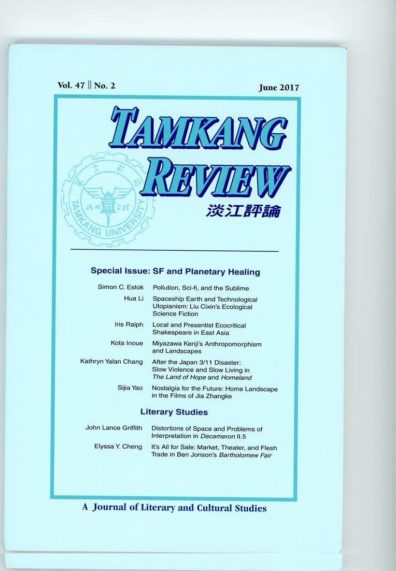 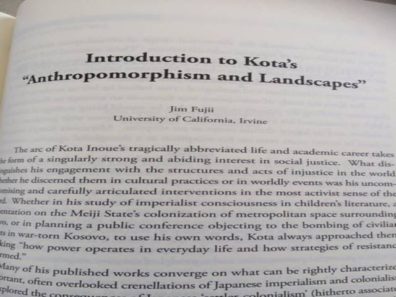 Instructor of Arabic, Manal Shaheen, was awarded a Certificate of Recognition from The WSU Muslim Student Association (MSA). Shaheen was recognized for her excellent contributions to the Arabic culture and language by devising new ideas and techniques in teaching Arabic for non-native speakers.

Joshua Bonzo, clinical associate professor of German; Ana María Rodriguez-Vivaldi, associate professor and CAS associate dean; and Jolyon T. Hughes, chair, were selected to serve on the realignment committee that oversaw creation of a proposal for forming a School of Languages, Cultures, Ethnicities, and Identities at WSU.

Second-year Spanish graduate teaching assistants Mike Chavez and Carolina Encalada-Hidalgo authored contest-winning papers selected for publication in an anthology along with work by 40 other student writers. The contest was cosponsored by the City of Seattle and the Mexican Consulate and held in Seattle.

Vilma Navarro-Daniels, associate professor of Spanish, was selected as guest editor for a special volume of the peer-reviewed journal Contextos. Her proposal bridges literature, humanities, cultural studies, and pedagogy. Navarro-Daniels’ paper focuses on new approaches to teaching humanities and cultural studies related topics through theater. The volume is scheduled to be published in Spring 2019.

Francisco Manzo-Robledo, professor of Spanish, was selected to participate in an academic review of several universities in Spain, including Universidad de Nebrija, Universidad Carlos III, Universidad de Salamanca, and Bilbao Universidad Duesto. Manzo-Robledo and six other faculty members from various U.S. universities reviewed the academic, housing, and health and safety facilities that students are provided during their studies abroad through the International Studies Abroad program. The team interviewed students and faculty at each university to gain valuable insight and identify the feasibility of offering courses in Spain using ISA facilities in the future.

After serving two years as secretary of the Executive Board of the International Association of Hispanic Women’s Literature and Culture (AILCFH), Associate Professor of Spanish Vilma Navarro-Daniels was elected to be vice president. Members of this society consist of faculty, graduate students, and writers from Europe, Latin America, the Caribbean, Canada, and the U.S. Navarro-Daniels will hold this position for two years and will then serve as president of the association for two additional years.

The Museum of Memory and Resistance in Santo Domingo, Dominican Republic, announced plans to exhibit Dr. Navarro-Daniels’ scholarly work she wrote about on Los archivos del cardenal (The Cardinal’s Archives), a Chilean TV series. The research is in regards to human rights and the common past of dictatorships and dramatic violations of human rights in Chile. It was very touching for Dr. Navarro-Daniels to learn about D.R.’s history, as it is so close to her own history as a Chilean. 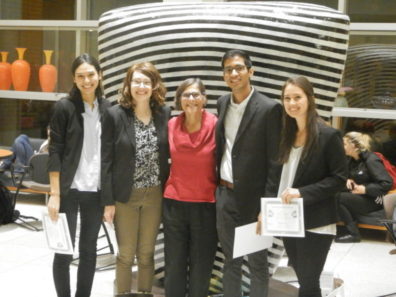 After completing her term as executive director of the Rocky Mountain Modern Language Association, Joan Grenier-Winther, professor of French, WSU Vancouver, was honored with the creation and naming of a conference award in her honor. The new Joan Grenier-Winther Award for Best Conference Presentation in French Studies recognizes her service to the RMMLA and her support of French studies.

Christen Velasquez, student of French, and her WSU Global Case Competition team, TanzEquity, won the 7th annual contest in October against 120 other participating teams! The 2017 competition was focused on digital inequality: information and technologies in Tanzania. 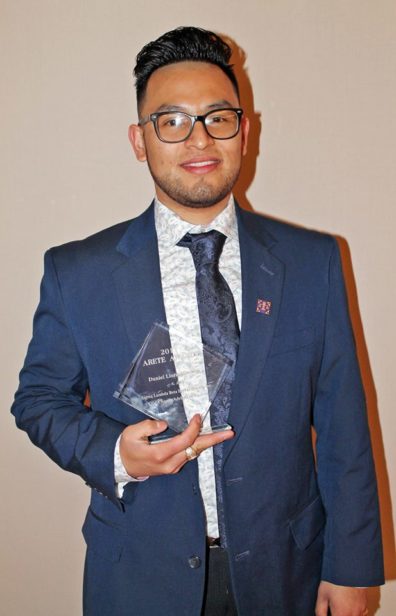 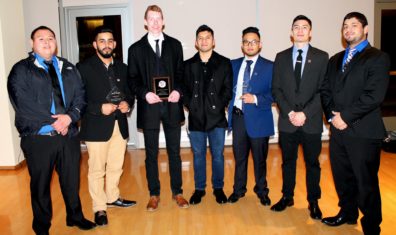 Office Assistant Daniel Liera-Huchim was awarded the United Greek Council’s (UGC) Chapter Advisor of the Year award at the 2017 Arete Awards held in November. The Arete Awards are presented annually by WSU’s Center for Fraternity and Sorority Life, which houses the Interfraternity Council, Panhellenic Council, and United Greek Council. Liera-Huchim advises the WSU Omicron Delta Chapter of the Sigma Lambda Beta International Fraternity on the Pullman campus and is an alumnus of the Beta Gamma Chapter of the Sigma Lambda Beta International Fraternity at the University of Idaho.

Instructor of German Karen Jennings attended the Language Immersion Retreat and Workshop at the Washington American Association of Teachers of German Conference in September. The conference was an excellent networking opportunity with high school and German Saturday School teachers.

Associate Professor of Spanish Vilma Navarro-Daniels presented her research paper on Sebastián Sepúlveda’s film The Quispe Girls at the 71st Annual Convention of the Rocky Mountain Modern Language Association (RMMLA) in Spokane in October. In her analysis of Sepúlveda’s movie, Navarro-Daniels bridges the fields of gender studies, ethnography, and film studies. Her analysis raised a high number of questions, which she fielded during the Q & A portion of the session titled “New Latin American Cinema.”

Clinical Associate Professor of French Sabine Davis presented her paper at the annual Washington Association of Foreign Language Teachers (WAFLT) conference in Pasco, Wash., in October. The conference focused on teaching methodologies in foreign languages, and ways to make learning a foreign language an enjoyable and productive journey. Davis’ presentation was titled “French for the Professions: A Group Project.” Instructor of Russian Elena Smith also attended and presented her paper at the conference. Dr. Smith’s presentation, titled “Mastering Russian in a Dressed-up Classroom” was well received. Both Davis and Smith enjoyed chatting with other foreign language colleagues and made some new friendships.

Instructor of German Karen Jennings attended the Fall Conference of the Idaho Association of Teachers of Languages and Cultures (IATLC) in October. Jennings was able to share ideas from summer scholarly activity in Germany with high school- and college-level educators. “It was amazing to see the interest for German language and culture around the world and to build friendships and exchange ideas,” she said.

Associate Professor of Spanish Vilma Navarro-Daniels delivered a scholarly presentation on Chilean comic author Marcela Trujillo at the 27th International Annual Congress of the International Association of Women’s Studies in Hispanic Literature and Culture (AILCFH) in Santo Domingo, Dominican Republic, in November. A larger version of Navarro-Daniels’ paper will be published in the peer-reviewed journal Revista Canadiense de Estudios Hispánicos.\

Instructor of Japanese Kayo Niimi attended and presented a paper at the 2017 Annual Convention of World Languages Expo in Nashville, Tenn., in November.

Associate Professor of Chinese Xinmin Lui is part of a cohort of faculty members from the WSU School of Design and Construction and the Asia Program who are busy preparing for the upcoming regional workshop, Revitalizing Rural Environments. The workshop will be held March 29–April 1, 2018, on the WSU Pullman campus. Liu is in charge of the theme, “Planetary Healing” of Rural Environments, and will present with a number of other invited speakers with his mini-lecture “The Human-Land Affinities—Where the Healing Begins.”

Amanda Hussein, second-year Spanish graduate teaching assistant, authored a paper accepted for publication in the October issue of the International Journal of Language and Linguistics.

Associate Professor of Spanish Vilma Navarro-Daniels’ paper has been accepted for publication in a peer-reviewed volume Narratives of Fear: Terror in 20th– and 21st-Century Latin American Literature, Film, and Television.

French undergraduate Margaux McBirney was the first author on a paper published in the journal PloS One. It has been viewed online more than 6,000 times since its publication in September. McBirney’s research was performed in the biological laboratory of Michael Skinner, who determined the epigenetic effects of atrazine, one of the most commonly used herbicides in the agricultural industry. McBirney is an Honors College student majoring in genetics and cell biology and minoring in French.

Associate Professor of Chinese Xinmin Liu was awarded a 2017 WSU Arts and Humanities Grant of $3,500 in the spring. He completed travel to Zhejiang, China, during the summer to conduct a field study of three sites of rural revitalization. Liu visited sites throughout the country that displayed perfect examples of China’s recent strategic shift from the coastline to small cities and rural towns in the central and western regions. Liu is editing his research findings and compiling them to present in poster form at the upcoming WSU Showcase in March 2018. 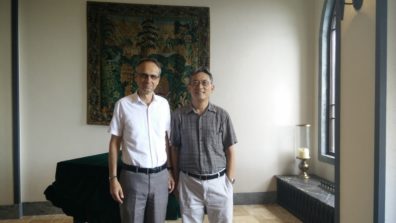 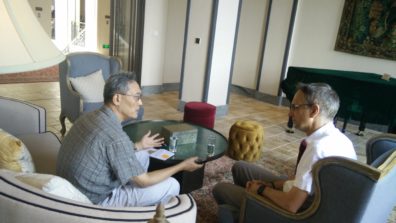 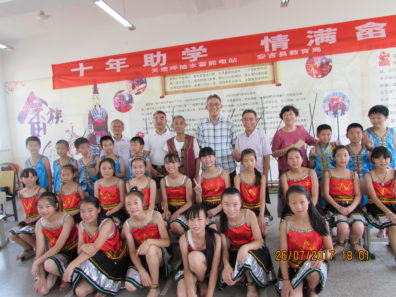 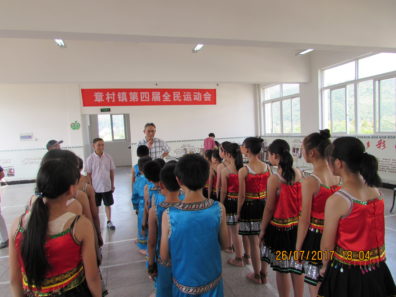 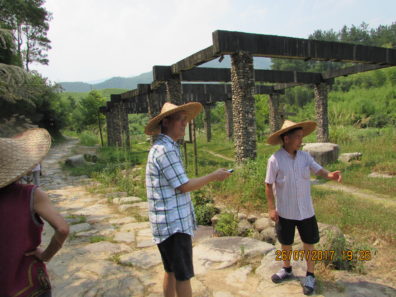 Instructor of German Karen Jennings was awarded a grant through the Goethe Institute to participate in a cultural seminar in Leipzig and Munich, Germany, during the summer. With more than 24 other participants from 17 other countries, Jennings was the only participant from the United States. She returned with a wealth of innovative ideas and activities for teaching German culture. 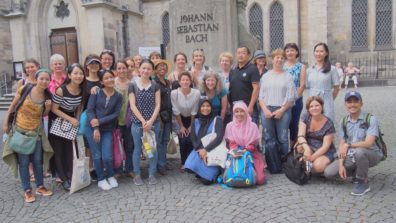 Chair and Professor of German Jolyon T. Hughes was awarded a $15,000 grant from the Max Kade Foundation for his annual faculty-led study abroad program to Germany. Students who participate in his upcoming faculty-led summer study abroad to Vienna, Austria, will be eligible for one of 15 scholarships of $1,000 each to defray travel expenses. 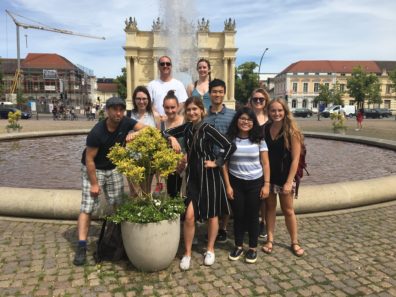