This summer our department participated in three faculty-led study abroad programs in Paris and Berlin in conjunction with WSU International Programs.

Insook Webber, clinical assistant professor of French, took six WSU students on an inaugural 6-week program in Paris that consisted of two upper-division courses taught exclusively in the French language. The program will run for the second year in the summer of 2018.

Students were offered two courses/6 credits (French 308/408 & French 320). Classes took place at the CEA program site located in the heart of the lively, bohemian Marais neighborhood, about a 10-minute walk to the Notre Dame Cathedral and the Seine River.

Students met roughly four times each week for the courses, leaving the rest of the week for extracurricular activities. The program began with a boat ride on the Seine on the evening of the students’ arrival. Students also visited Parisian monuments, such as the Louvre, the Musée d’Orsay, the Conciergerie, and attended a dance performance at the Opéra Garnier.

Site visits outside Paris included: The Château de Versailles, the Loire Valley, Reims (famous for the Cathedral where the kings of France were crowned and for Champagne production), Chartres (home of one of the finest and best-preserved Gothic cathedrals in France) and Giverny (Claude Monet’s home and garden).

During free weekends, students visited the Mont St. Michel on their own, which became one of their most memorable experiences. In Paris, they spent almost every Sunday evening on the Champ de Mars (a vast landscaped park along the Seine) to watch the Eiffel Tower light up.

The six weeks spent in France was a blast! Students were sad they had to leave just as they acclimated to the culture and language. As the students confessed, the most upsetting part of leaving Paris was the food! From a fluffy croissant to gelato, it won’t be the same in the United States. 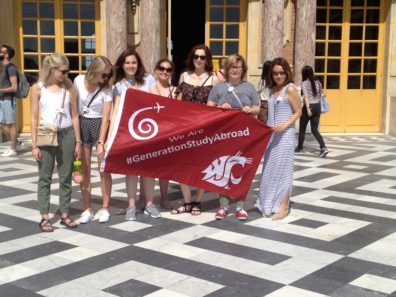 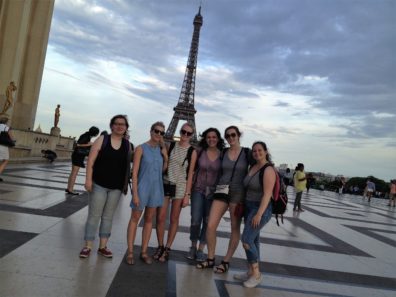 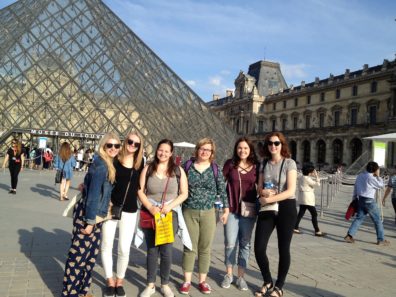 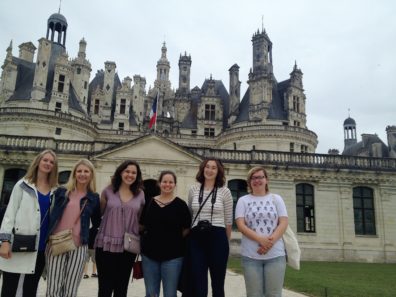 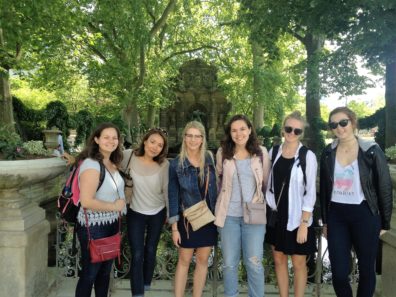 Dr. Joshua Bonzo, clinical associate professor of German, took five WSU students on an inaugural faculty-led study abroad trip to Berlin for a two-week program consisting of one course taught completely in the German language and the option of an upper-division course for Honors student participants. The program will run for a second consecutive year in summer 2018, again to Berlin.

The program consisted of two upper-division courses (German 308/408 and German 320/420) taught in the German language. In summer 2018, the program will rotate to Vienna for its fourth year. Dr. Hughes recently received a generous grant by the Max Kade Foundation to offer student participants $1,000 scholarships to help defray travel costs, just in time for the summer 2018 trip.

“I studied at Washington State University and had the opportunity to complete the faculty-led 2017 six-week advanced study abroad program in Berlin, Germany.

“My university partnered with IES International, which provided the location for our courses, which were led by WSU faculty. This program allowed me to complete the credits I needed to finish my major in German for the Professions. One of the most attractive features of this program is the ability to complete 6 credits in just 6 weeks. During my study abroad I had ample time to complete my course work and had time to explore and travel around the country. I did all this all while using the language skills I was learning in the classroom right in the real world!

“Berlin was an amazing city. There was a never-ending supply of things to do and places to visit. The incredible public transportation allowed me to go pretty much anywhere I wanted and in a reasonable amount of time. Our program was structured to allow us to take advantage of these opportunities. We had class in the mornings, and afternoons free, and each Wednesday we had a cultural field trip, accompanied by an instructor or amazing guide. The customization of the program is one of the strengths of this type of study abroad.

“I had so many fun opportunities to practice my German language skills and many chances to travel around the country. Life in Berlin was full of learning, laughing and exploring. The city is steeped in cultural and modern history, providing endless possibilities for those living or visiting. Berlin’s distinct neighborhoods show the vibrant modern side of Berlin, while the historical areas and museums provide the rich cultural background.

“I had the opportunity to stay for the duration of program with a German woman through the homestay program. This opportunity allowed me to practice my language skills and delve more deeply into the culture and understand the atmosphere of the ‘Berliners.’ The program encouraged us to explore and be independent and to utilize the skills we had been taught.

“I would recommend the faculty-led study abroad program to other WSU students interested in studying abroad, improving language skills, and earning WSU credit.

“This past June, I had the wonderful opportunity to participate in the Mukogawa Women’s University summer exchange. I spent three weeks in Nishinomiya, Japan, a city near Osaka. During these three weeks, I stayed with the wonderful Onhari family. From the second I landed in Japan, I was spoiled. Mama, Papa, and Mei (my host sister) lived in the mountains surrounding Nishinomiya and the view from my room was breathtaking. They were kind, generous, and hilarious; making my first trip out of the country a delightful experience.

“During the day, I studied at Mukogawa Women’s University with nine other girls from all over the world. We were split between two classes based off previous knowledge. For the first several hours of each day, we studied Japanese with native speakers. Most of the teachers did not speak any English, so every lesson was taught solely in Japanese. When I first discovered this class structure, I was paralyzed with fear. Although the first few days were difficult, by the end of my trip I had learned to hold complete conversations in Japanese.

“After language class, we had cultural experience classes. In these classes we learned a traditional Japanese dance while wearing yukatta, played games with Japanese students, visited a preschool, and even went on a day trip to Nara (where we got to feed small deer and see the oldest Buddha statue in Japan). These were by far my favorite classes. I got the chance to explore Japan, interact with people, and learn so much about the country. It was during these afternoons that I fell in love with Japan in its entirety.

“I kept waiting for culture shock to hit me throughout this trip. However, I think the people in Nishinomiya were more shocked by me. Nishinomiya gets less foreigners than larger cities, so everyone stopped and stared when I passed by. At 5’ 10”, I was taller than most men in Japan, and my partially shaved head and tattoos were brand new sights for most Japanese people. In Japan, tattoos are incredibly rare and usually connected with organized crime; and edgy hairstyles are really only seen in Tokyo. While I had to get used to the stares, I did not find them threatening. It made me realize that both Japan and I had a lot to learn about one another.

“My experience was wonderful and completely amazing. I now have friends in all parts of the world, a Japanese family that I cannot wait to visit again, and memories that I will never forget. I cannot say thank you enough to the International Program and the WSU Department of Foreign Languages and Cultures for making it possible.

“If you have the chance to go to Japan, go! It will always have a part of my heart and hopefully it’ll make you fall in love too.” 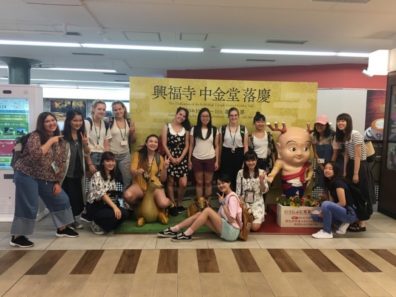 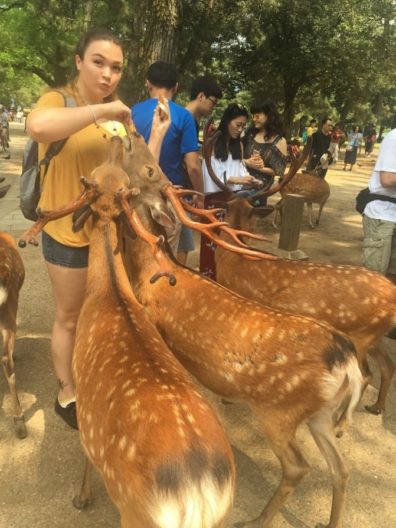 “Japan is an amazing place, and beyond the outer perceptions and tourist-facing image exists an amazing culture and way of life that one really can only experience by truly immersing one’s self in it and learning the language. I was fortunate enough to be given the opportunity to study abroad for a full year in Japan. The people I met, the experiences I had, and (of course) all the food I ate left a lasting impact on me.

“I started off my year living in Daikanyama, Shibuya, with a host family. Being that Shibuya is one of the main city centers of Tokyo, I had a lot of opportunities to go and see events and festivals. I even got the chance to participate in the Omikoshi Matsuri with my host father, where we helped transport a shrine for nearly five strenuous hours. Living with my host family, I got to experience a lot of day-to-day life in Japanese society. From eating under the kotatsu during cold nights, to seeing my host family sisters coming back from cram school at 9 p.m., I was exposed to an entirely new culture.

“As winter came along, I decided to move to a sharehouse, where I lived with roughly 20 other working adults, most whom of which were Japanese. Through our weekly late night conversations, I began to understand some deeper underlying themes that govern Japanese society. I also got to celebrate Japanese holidays and had many opportunities to eat traditional food at our various house potlucks.

“In regards to school, the environment was awesome. My Japanese language classes were very intense, but the small structure of the classes and the excellent teachers allowed my fellow classmates and me to learn at a very fast pace. I challenged myself by taking a Korean course and business course taught in Japanese. Despite the language difficulties, the classes went well and I was, in turn, able to interact with Japanese students for the first time in a classroom setting. The school clubs in Japan are pretty intense and require a lot of commitment. I joined the Japanese Traditional Dance Club and I was asked to do a solo performance at the winter dance event.

“My experience in Japan was amazing. I had unforgettable nights and made awesome friends. Through my Japanese language skills, I was able to truly become a part of Japanese society, which has convinced me to pursue job opportunities there. I am very thankful for my Japanese language education here at WSU and encourage anyone who has an interest in Japan, to experience learning the language firsthand.” 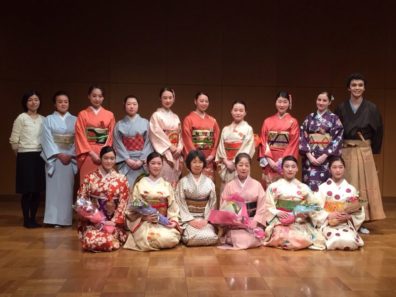