Students enrolled in Arabic 102 had the opportunity to participate in class activities to understand not only the language but the Arabic culture, too. Students have created various skits to connect the language with the correct way to interact and speak. Instructor Manal Shaheen provided her students with in-depth cultural experiences, such as traditional food tastings, cultural music, and working with WSU’s Muslim Student Association (MSA) and Middle Eastern Student Association (MESA). Shaheen’s creative contributions have been recognized on campus and in the community.

In honor of the students’ hard work and dedication over the semester, Shaheen held a celebration for her 102 students during pre-final exams “dead week.” She taught her students to perform a Dabka (a traditional Levantine dance) and gave her students the opportunity to try authentic Egyptian baklava and falafel!

As part of our ongoing collaboration with the Asia Program, academic advisor Laurie Heustis and several faculty visited the Asia 301 class and taught the students mini lessons in Chinese, Arabic, Japanese, and Korean. The course is all about current Asian culture, which fits right in with our faculty’s teaching and research. 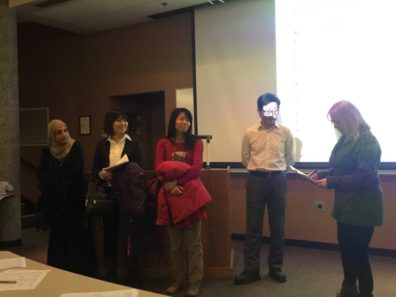 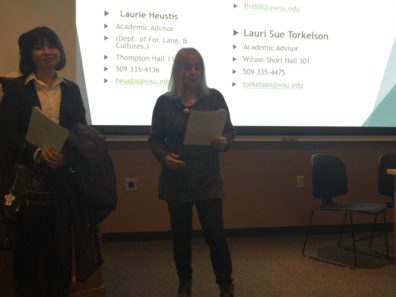 Our Chinese faculty are heavily involved with the Chinese Table each week, providing hands-on support for their students’ language learning, along with snacks for the students to enjoy. Dr. Xinmin Liu and Dr. Weiguo Cao go above and beyond to provide their students with positive learning experiences both inside and outside of the classroom, with the assistance of our visiting scholar from the Confucius Institute, Hongwei Wang.

The Chinese faculty hosted a celebration of the Chinese New Year in February at one of the Chinese Table events with a party full of traditional Chinese snacks and beverages. The celebration was very special for the students and a unique experience we hope they will never forget! 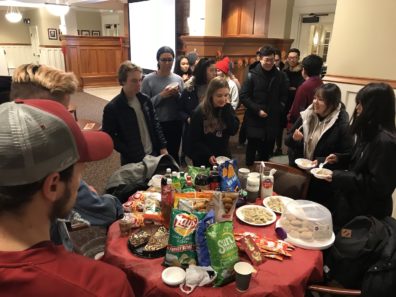 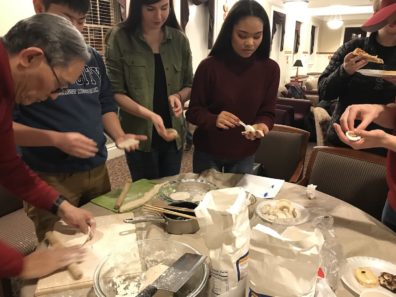 On April 16, the Chinese faculty held a talent show for students who participated in the Chinese Table this semester outside of the classroom to show off their Chinese language skills. Students expressed themselves creatively through poems, songs, and even calligraphy art! Everyone enjoyed themselves, supported each other, and shared great food and conversation. 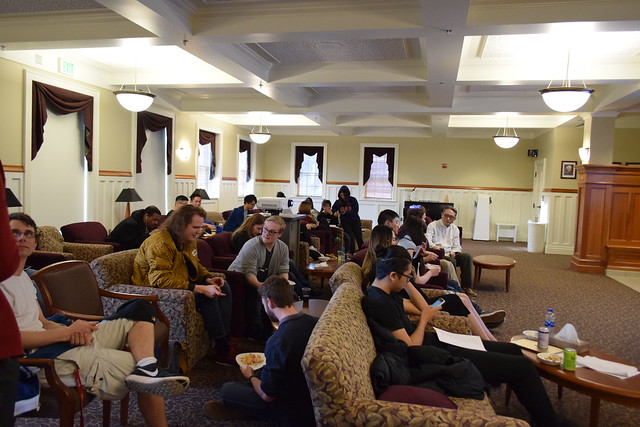 Thanks to French faculty Sabine Davis and Jacob Barrows, we are pleased to announce that the French Club is once again a registered student organization at WSU! Davis and Barrows played an instrumental role in reviving this once-popular club for our students with the hopes of providing additional support, out-of-class activities, and a better understanding of the French language and culture. 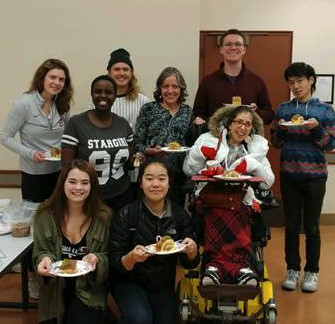 For Valentines Day, French section head Sabine Davis welcomed the French Club students into her home to learn how to bake and cook French delights. Students enjoyed learning how to make crepes in the traditional French way before tasting the fruits of their labor in the most delicious way! 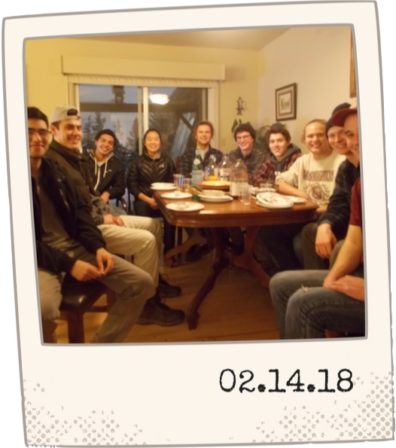 One way the German faculty encourages students to gain familiarity and experience with the German culture is through film. German Filmabends, or movie nights, are held throughout the semester for students to immerse themselves into the culture and language. The Filmabends events in February and April were attended by students in 100- to 300-level German courses. 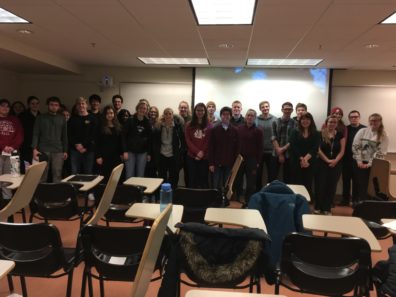 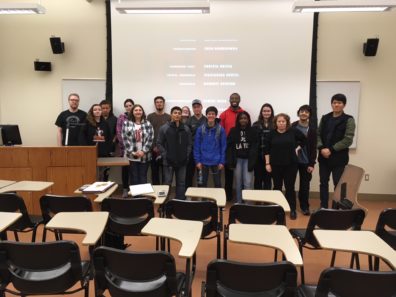 In February, clinical associate professor Sere Previto showed the Italian film La mafia uccide solo d’estate. This comedy-drama was directed by one of Italy’s actors and newest directors, Pif, and tells the story of a young boy chasing love in the city of Palermo while getting involved in the Mafia. It is set in the roaring ’70s.

Italian students gathered at WSU’s Asian Pacific American Cultural House to celebrate a night of Italian language and food hosted by Italian section head Sere Previto. Students enjoyed traditional food while sitting in a big circle, practiced Italian conversation, and even helped prepare the dishes. The students feasted upon spaghetti, mozzarella balls, caprese salad, garlic bread, and more. Previto taught everyone how to say any words they were unaware of and how eat like an authentic Italian, and encouraged students to share personal stories in Italian throughout the night. 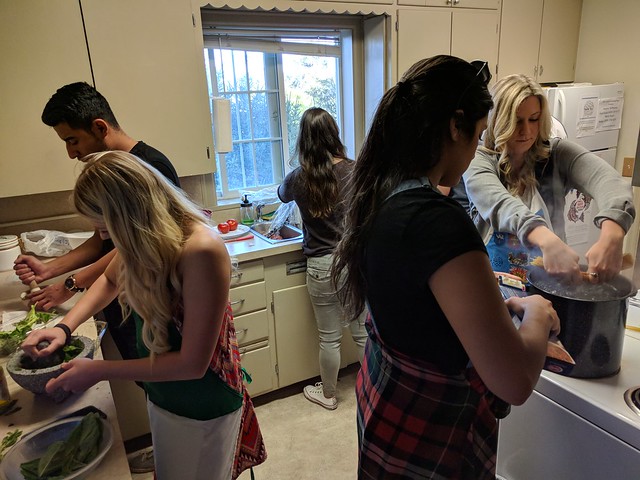 Japanese instructor and section head Kayo Niimi shows TV commercials from Japan to expose 100-level students to the culture and provide unique shared experiences. This particular activity focuses on listening practice; after viewing a commercial, students answer questions about what they heard. The commercials are brief and feature slow speaking to ensure beginning-level students can understand and follow the conversations. Niimi presented this teaching method at a workshop at the East Asia Center at the University of Washington in May 2017.

The Japanese faculty delight in participating in the weekly Japanese conversation table to provide additional out-of-class support and encourage their students’ overall language learning and mastery of language skills.

Another way our Japanese faculty get involved on campus with students is through the Japanese Student Association (JSA) at WSU, which started in fall of 2016 and has doubled in size since then. The JSA holds a study table and a general meeting every week for students interested in learning about Japanese culture and language.

This semester, the JSA presented on the impressions of America and Americans from the perspective of Japanese students. International student Nao Kawaguchi (right) and an exchange student from International Christian University in Japan, Hikaru Fukase (left), presented their findings and experience to the JSA and public. 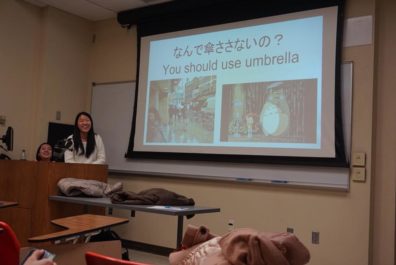 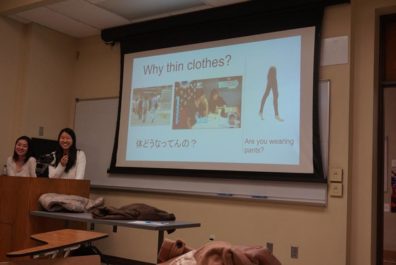 Another presentation hosted by the JSA this semester was based on the idea of what students should expect on their first visit to Japan. JSA vice president Seiji Furukawa and PR/marketing officer Brandon Parkinson conducted the presentation to provide JSA and the public with a closer look into different cultural practices in Japan. 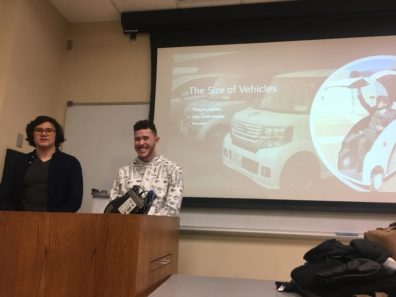 These presentations were held during the JSA general meetings as an attempt to bridge the gap in cultural understanding between American and Japanese students from differing societies and cultures. 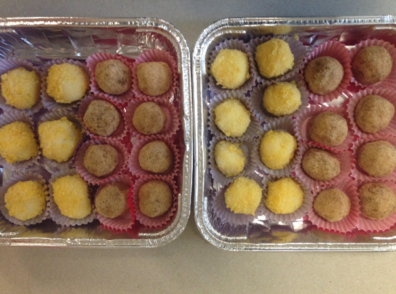 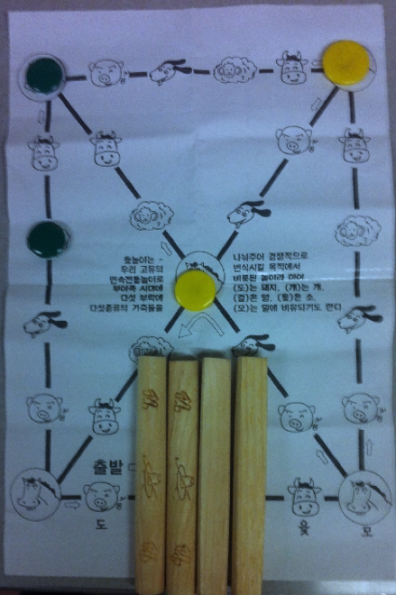 Korean students were offered a unique opportunity to learn about hanbok, which is traditional Korean attire. Worn daily until about 100 years ago, the hanbok is now predominantly worn on special occasions and holidays. Students learned a bit of history of the hanbok and were thrilled at the opportunity to experience a traditional hanbok fitting. 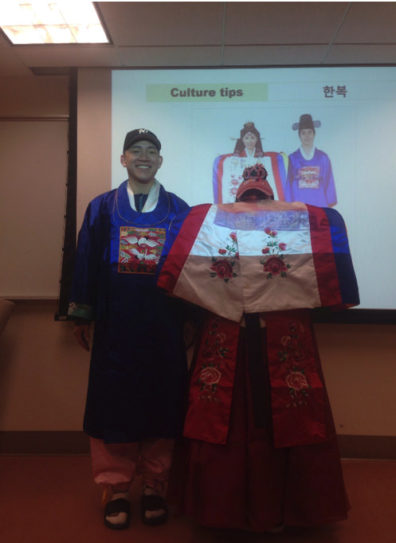 The Russian 204 students devoted time to create skits, which included everyday life scenes, such as visiting a restaurant or going to a doctor’s office, and acted them out in Russian. Students were also expected to translate English into Russian as they became more familiar and confident in their language skills, and enjoyed reading and discussing Anton Chekhov’s short stories in Russian during class. 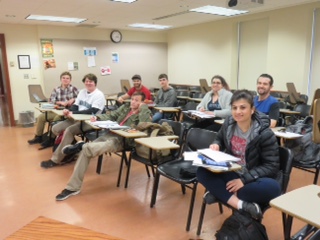 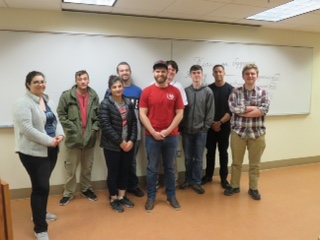 Russian Film 410 students watched 10 movies over this semester all of which were about Russia’s complicated history, culture, and mentality. These films helped students better understand who Russians are as a nation, which was very eye opening. For their final projects, students demonstrated their abilities in the famous Russian Stanislavsky Method, which is a highly influential system of acting developed by Russian actor, producer, and theoretician Konstantin Stanislavsky. 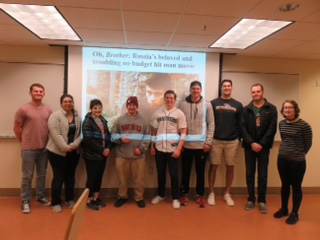 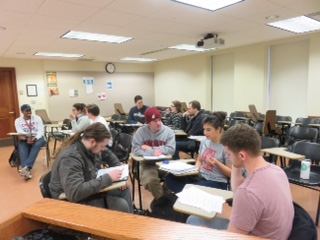 The WSU Association of Russian Culture Learners is a registered student organization (RSO) advised by Russian instructor Dr. Elena Smith. Dr. Smith has done a tremendous job with the group; they are very active and engaged in both the WSU and Pullman community. In addition, native Russian speaker Svetlana Kushnerchuk, a first-year graduate student in our Hispanic Studies program, leads the weekly Russian conversation  table. Thanks to Svetlana’s hard work and dedication to our students, the Russian Table became increasingly popular over this academic year.

Second-year graduate teaching assistant Priya Panday Shukla encouraged her Spanish 102 students to participate in the “Food and Fun” challenge. This challenge was to practice their Spanish language skills outside of class while having some fun! Watch the winning video below!

In April, Panday Shukla held an in-class celebration with Latin American food and music. This cultural event was a fun way for all of her 100 level students to experience Latin American culture. Students noshed on fruit, pan, chips, coconut water, and guava juice. Panday Shukla combined both of her classes so that students could experience this event together while introducing themselves and engaging in casual conversation in Spanish. Before leaving, students were required to say one sentence in Spanish before leaving the classroom with a caramel-like wafer treat. 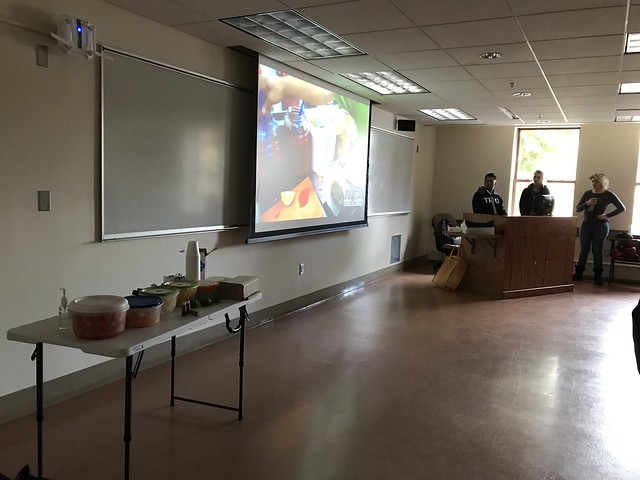