For the 2014-15 academic school year, the department has welcomed two social media interns to the team to help improve our online presence. 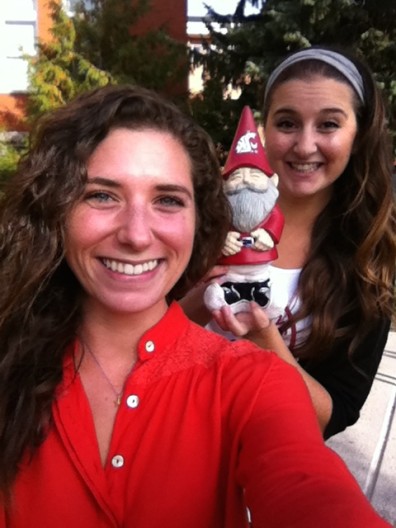 Anna Becker (left) and Hayley Pearce are both senior strategic communication students in The Edward R. Murrow College of Communication. These social-media-gurus-to-be keep campus and community members up to date with department events, international holidays, and more!

As part of the social media revamp, the department has introduced a new member to the WSU community, Tomás the gnome. Tomás is recognized as the department mascot and can be found at a variety of campus events helping to promote the department (he even participated in the ASWSU Slip ‘N Slide and DFLC ALS Ice Bucket Challenge). Every week, the department spotlights a student or faculty member, who serves as the “Gnomie Homie” of the week. This social media campaign offers a more interactive and engaging platform for the department, while highlighting outstanding members from our university community.

Is there something YOU would like to see posted on our social media sites? Contact Anna and Hayley at dflc.wsu@gmail.com

You can stay up to date with the department by personally liking/following our social media sites: 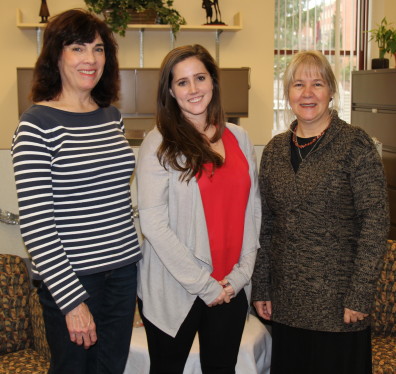 Cynthia Davis (left) has been the receptionist working with the department since 1994 and says she feels at home in the department.

This semester we welcomed a new secretary, Brittany Merrill (center) from Arizona State University. She is excited to start her new position and is happy to be a part of the WSU community.

Laurie Heustis (right) has been working in the department for 14 years as the Academic Program Manager/Advisor. She loves working with both students and faculty in academic areas and is excited to be back in the main office.

I first had Joseph as a student in my German 203 class two years ago. He was a student in my German 320 Spring 2014 and is currently a student in my German 310. He always has been a very enthusiastic and devoted student of the language. BUT this semester he is increasing his proficiency in the language by leaps and bounds. He was able to spend time with his German host family in Aachen this past summer. AND in addition to class assignments, he makes a great effort to immerse himself in the language, i.e., he subscribes to German TV online and reads German texts online as well. He is a model student in terms of hard work and perseverance and is now reaping the rewards. In addition to his course load, he also works a significant number of hours each week for Cougar Security, i.e., the night shift . . . on weekends! 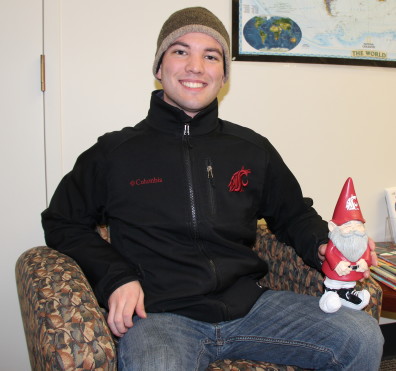 How many languages do you speak?

What is one language you wish you could speak and why?

“Dutch, because in a way it is similar to German and English and I often visit the Netherlands when I am in Germany.”

If you wrote a book about yourself what would the title be?

If you could travel anywhere, where would it be and why?

“If I could travel anywhere, it would be to Aachen, Germany. I spent a year of my life in this city and for me it is very much a second home.”

If you could meet any person (past/present) who would it be and why?

“If I could meet any person in the present it would be Dr. Angela Merkel, Federal Chancellor of Germany. Her leadership as Chancellor is an inspiration for me as a Political Science student.”

What are your career aspirations?

“Upon graduating from WSU, I intend to pursue a career working in a political institution in Germany or the United States.”

What is your favorite class you have taken at WSU?

“My favorite class I have taken so far at WSU was German 320 last semester taught by Professor Halverson. I enjoyed learning about the German culture and history, in addition to learning further in the language.”

Heather Morse is exceptional in her academic performance. She is in two of my classes, French 110 (French & Francophone Cinema, taught in English) and French 450 (Topics in French Studies, taught in French). In both classes, her performance is way beyond that of even the best students. Besides her 100% attendance record, the quality of her writing (both in English & French) and her reflections on any topic are impressive, a truly rare case. 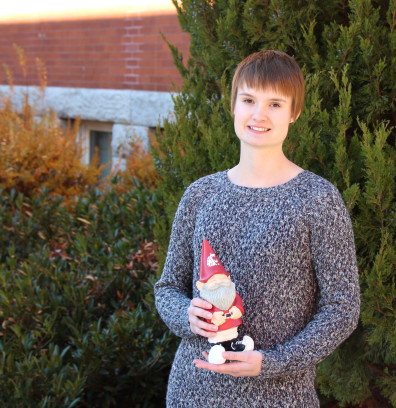 What is one language you wish you could speak and why?

“Italian: I love the culture and history of Italy!”

If you wrote a book about yourself what would the title be?

“The Art of Daydreaming”

If you could travel anywhere, where would it be and why?

“Southern France: It’s beautiful, and I hope to live there someday.”

If you could meet any person (past/present) who would it be and why?

“J.R.R. Tolkien: He was a brilliant writer.”

What are your career aspirations?

What is your favorite class you have taken at WSU?

“All of my French classes!”