Priority registration for Fall 2015 begins Monday, April 13th. Students should make appointments with Laurie Heustis in 110 Thompson Hall for academic advisement, and advising hold releases. Be sure to look at your zzusis degree audit, and to view available courses for Fall and Summer 2015. To make an appointment, there is an advising schedule located outside of Laurie Heustis’ Office, Thompson 110C. Sign up for a time that is convenient for you!

We would like to thank the Department of Foreign Languages & Cultures for providing us with such an inviting and diverse work environment. The experiences we gained over the past year has allowed us to develop as intercultural communicators, global thinkers, and social media gurus (at least we like to think so). Our time here at DFLC has been unique and unlike most jobs. At times we have felt as if we have gained the exposure a world traveler experiences, by simply interacting with the faculty and students in the department. Graduating this May will be bittersweet, but we are excited to pass this position along and watch it continue to grow! 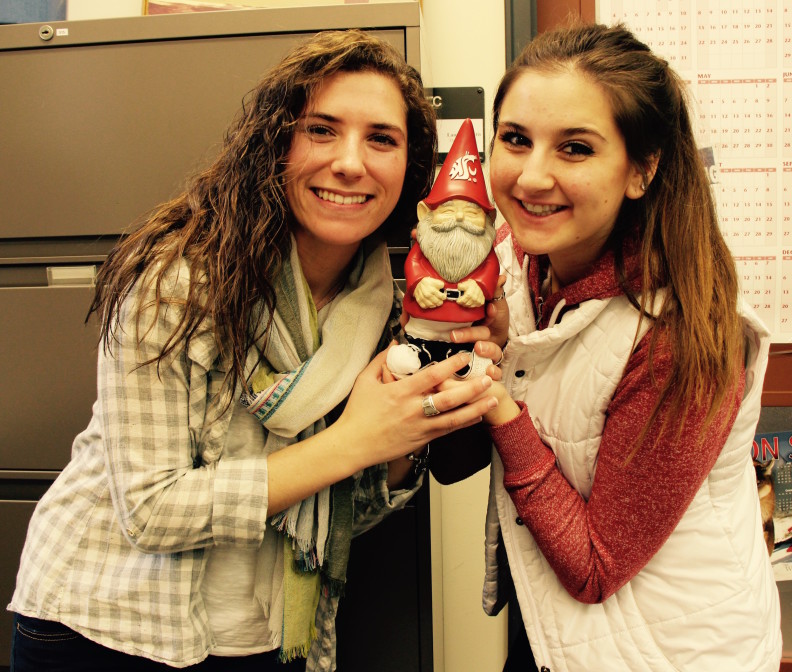 Hayley Pearce (right) is planning a backpacking trip this summer through Europe. Hayley says working at DFLC has opened her eyes to many different cultures and lifestyles, and she is excited to get a true taste of these cultures abroad. Upon her return to the United States, Hayley will be applying to graduate school at WSU and continuing her studies in communication.

Anna Becker is also planning to travel after graduation. This September Anna has a one-way ticket to Berlin, followed by an exploration around Europe ending in Spain. She hopes to continue her practice with the Spanish language by working in Spain and immersing herself in the culture.

We are wishing everyone a summer full of adventures and of course, Go Cougs!

Congrats to French Instructor Sabine Davis and Spanish Instructor Cassandra Gulam for their recent induction into the WSU Teaching Academy. German Professor Dr. Rachel Halverson has been a member of the academy since the creation in 2004.

The Humanities Planning Group, chaired by Dr. Christopher Lupke (Chinese, DFLC), with the support of the WSU College of Arts and Sciences, presented Humanities Week “A Humanities of Inclusion”, February 17-19. The week included a Roundtable discussion and presentations. 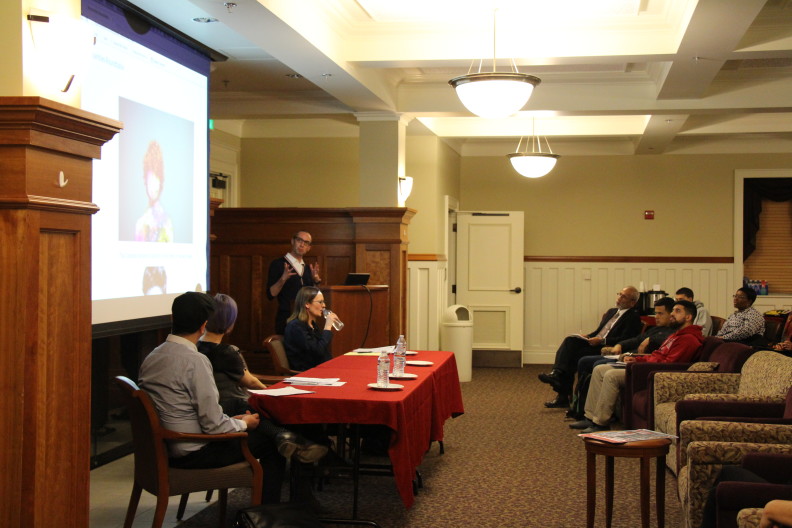 The Humanities Planning Group has been working together for four years now, promoting the stabilization of a Humanities Center at WSU.

Each week DFLC spotlights an outstanding student, naming them, “Gnomie Homie of the week,” with our department mascot, Tomás. We ask students to share a little bit about themselves and their language experiences. For the newsletter we had two outstanding students nominated by their professors. 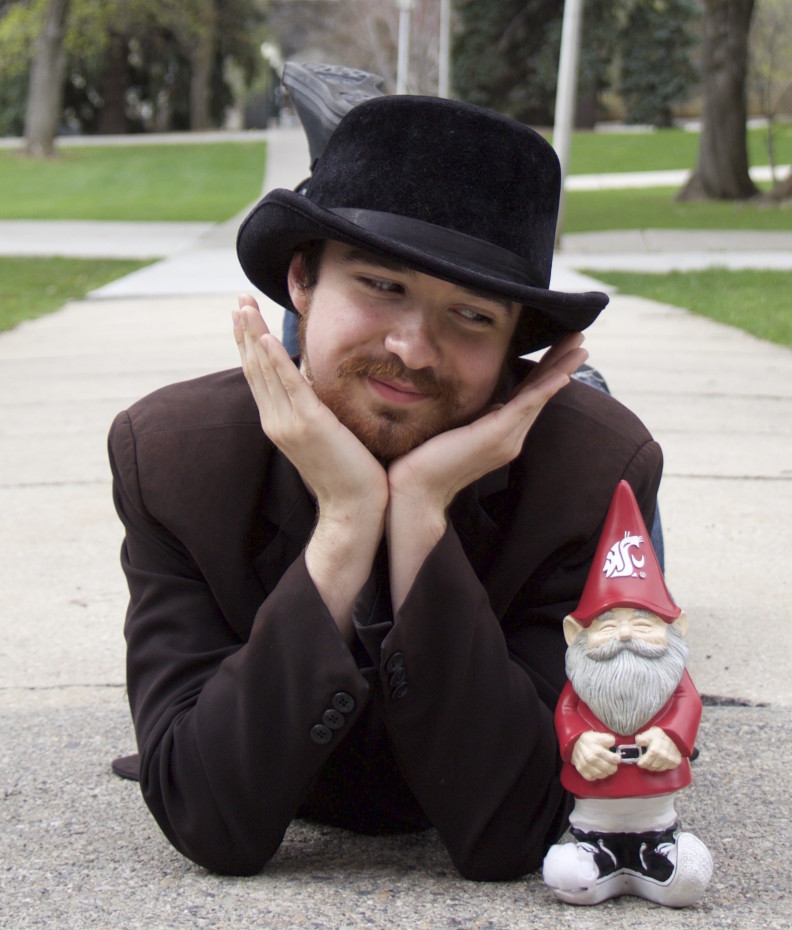 If you could live anywhere in the world, where would it be and why?

“I feel for me that it’s less of a matter of where and more of a how many countries can I live in, in my life. But if I had to choose one it would be Israel because it is a place where many people from all over come together and at the same time a place with many problems I’d like to help solve.”

What is the most eclectic food you have eaten or would like to try?

“The most eclectic food I’ve eaten is octopus. I’m still not entirely sure how I feel about it…”

In your opinion, what is the biggest benefit of learning another language?

“I believe the biggest benefit to learning another language is the gate of communication that is opened once you do. From learning this new language not only can you speak to an entirely new group of people, you are also able to be introduced into the culture of the language area as well which can lead to incredibly rewarding life experiences.”

What was your most embarrassing experience using a new language?

“In two languages (Spanish and Russian) I’ve made the mistake a few times of mixing up ‘good’ and ‘goodbye,’ so I’ve been in a few situations where I’m in mid-conversation and I accidentally say ‘goodbye’ instead of ‘good’ which awkwardly and abruptly ends whatever conversation I’d been having. Or the opposite has happened and the conversation has ended and the other person says ‘goodbye’ and I just say ‘good.’ It can get silly.”

If you could master any skill what would it be and why?

“The ability to master languages at a fast and efficient rate because I’d like to travel to many countries and it would help immensely if I could also easily learn their languages.”

If you could sing one song on American Idol, what would it be?
“Pinball Wizard by The Who.”

What are your plans after WSU?

“I would like to invest myself in radio broadcast and investigative journalism in hopes of having that combination propel me into traveling often.” 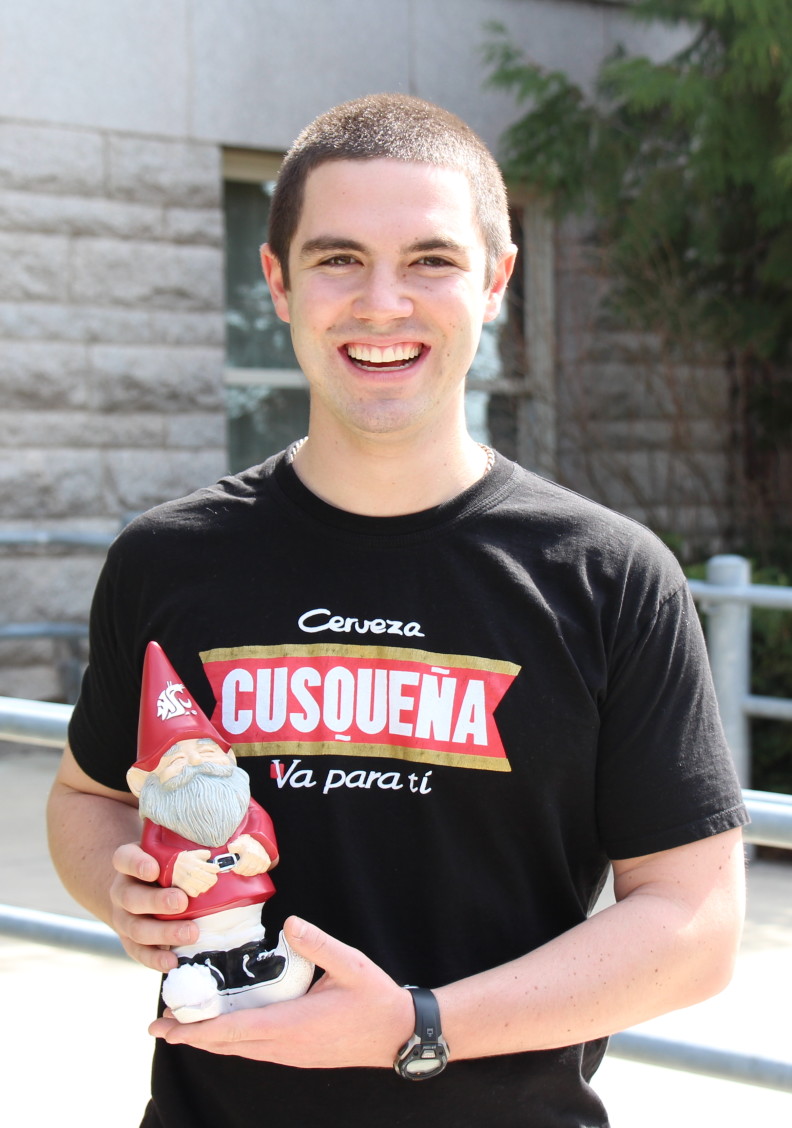 If you could live anywhere in the world, where would it be and why?

“I would join my extended family and live on the beautiful islands of Trinidad & Tobago! It is absolutely beautiful there with a lively and uplifting culture deeply rooted in music, culture, and tradition. Trinidadians love to dance, and boy do I fit right in.”

What is the most eclectic food you have eaten or would like to try?

“In Peru I was fortunate enough to try their famous cuy. Or as we call it in English… guinea pig!! It was honestly pretty gross, but definitely manageable.”

In your opinion, what is the biggest benefit of learning another language?

“Personally, I love the fact that I am able to communicate with an entire different population of the world (Spanish speakers). I love the idea of being able to build friendships and relationships with people whom I would not be able to if I only spoke English. Building relationships through my Spanish speaking ability is something I take extreme pride in, and more importantly I have been able to build personal, family-like relationships through speaking Spanish. On a business level, knowing another language allows an individual to instantly stand out above all other applicants for a position.”

What was your most embarrassing experience using a new language?

“My Peruvian homies, Gianfranco and Edson, informed me that a great way to compliment a woman was to approach her with the phrase, ‘Ay que rica.’ Turns out that is solely ‘bro to bro’ talk, and one should refrain from using that line on a woman. Needless to say I walked out empty handed with a nice hand print across my face, and I was able to provide Edson and Gianfranco with some free entertainment.”

If you could master any skill what would it be and why?

“I would love to fly a plane. I get the chills just thinking about being behind the wheel of a plane cruising down the runway about to take off. I would also love to master the backflip. I am still yet to do one in my lifetime, but boy have I tried and failed. Lastly, producing music and beats would be one of the coolest skills to master. I would love to put my heart and soul into a song and blast people’s ear off with a club banger! It is an exhilarating feeling to get people up and dancing.”

What are your plans after WSU?

“You know… that’s a great question! My goal is to ultimately work within a Major League Baseball organization, and then travel the world. I want to see everything. I want to meet as many people as possible. And I want to experience everything this world has to offer.”

If you could sing one song on American Idol, what would it be?

“Let Me Love You by Mario… absolute classic! I used to belt this one out during my early years at Goodman Middle School and still do to this day.”