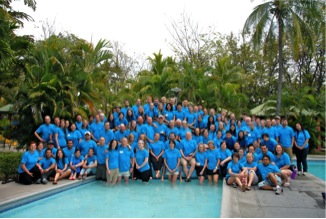 The mission for the Hearts In Motion organization is to provide an opportunity to individuals to help Guatemalan communities by providing care and medical treatment. HIM was established in 1990 and WSU has co-sponsored faculty-led missions since 2008. Since starting, WSU has had more than 120 students participate. Students have earned internship credits in ForLang 495 since 2010 and, starting last Spring (2014), in Biology 491 as another option. This way, students in health sciences who do not have Spanish skills can still qualify for credit.

This year, Dr. Ana María Rodríguez-Vivaldi was joined by Dr. Kathy Beerman, a School of Biological Sciences colleague, in serving as faculty co-director for the mission. Dr. Beerman teaches the introductory nutrition course for health majors, as well as courses in nutrition education and life cycle nutrition. Since joining the faculty at Washington State University in 1989, she has been the recipient of several college and university teaching awards including the Burlington Northern Faculty Meritorious Achievement in Teaching Award, the R.M. Wade Foundation Award for Excellence in Teaching, and the WSU Mortar Board’s Distinguished Professor Award. In 2008, Dr. Beerman was awarded the Sahlin Faculty Excellence Award for Instruction. In addition, Dr. Beerman was inducted into the President’s Teaching Academy at Washington State University, which is composed of faculty members who provide leadership to strengthen undergraduate and graduate teaching and learning. Her participation in the program led to a new collaboration with a local non-profit organization, StoreHouse, and its executive director, Tom Riedner. StoreHouse donated over 100 pounds of grains that the HIM students packed, transported, and distributed to needy families during the medical and dental missions in the Zacapa area. We are very lucky to have this new partnership to benefit the program, thanks to Dr. Beerman’s efforts, amazing support, and enthusiasm!

The program continues to grow and HIM 2015 is already in the works, with 26 wonderful students already confirmed for participation! Above all, we are very grateful for the continued support, personal and financial, that alums Howard Wright, Mark Paxton, and the Mitchell family have provided each year, allowing many deserving students to participate in the program. Our debt of gratitude for these amazing individuals is immense!

By Alexandra Davis, submitted by AMRV

My trip to Guatemala with the Hearts in Motion program was absolutely life-changing. Not only did I have a fun time, but also learned more about the Spanish language and Guatemalan culture than I ever could have in a classroom. The mission was unique because it gave me a chance to translate from English to Spanish, and back again, in a variety of settings (dental, medical, and casual). 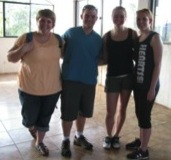 This helped me improve my ability to speak Spanish, and rising to the challenge of translation made me a more confident person. In addition to the translation aspect of the trip, it was a positive experience socially. Because of the mission, I became more connected to other Spanish students at Washington State University, as well as students in the health fields. I also had the chance to explore the country with the other students. The time we spent in Antigua, Guatemala was amazing, and I took full advantage of our free day by climbing an active volcano, as well as shopping and bargaining at the markets. I also had the opportunity to see various wild native animals, such as a parrot and lizards. Overall, the trip was an amazing experience in every aspect, but the most valuable part of the trip was the memories I made while interacting with the local people.

Through conversations with the Guatemalan people, I learned a great deal about their daily lives, and saw firsthand how different theirs were than mine. I heard truly inspirational stories of people who faced more adversity in their lives than I could ever imagine, and I talked and played with many children who lived in villages. Every conversation touched my heart and changed my perspective in life. 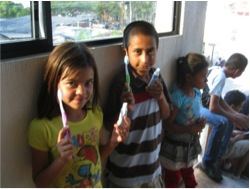 That experience was an unforgettable one, and one that may only happen once in a lifetime. I returned from the program with a greater enthusiasm for my education in the Spanish language and culture, and a greater awareness of the world around me.

Before going on the mission, I felt prepared for everything this trip would include. I had read about people living in remote villages and seen pictures of houses made of corrugated steel. I had a couple of teeth pulled myself, so I told myself that the week I spent in Guatemala would not be full of surprises. I couldn’t have been more wrong. Seeing firsthand and talking to people who live a life so different from mine was nothing like seeing the pictures. I felt lucky that I spoke Spanish well enough to talk with some of the kids, and learn about what growing up was like from their perspective. The thing that shocked me the most was how it seemed like they went straight from child to adult, whereas here in the United States, we have a long period of “in-between”, where we learn to be independent, are free to make mistakes, and slowly figure out who we are. I felt like, in the villages we visited in Guatemala, the children didn’t have that period of time. They went to school, learned what they needed to know from their parents, and then they became adults without spending ten years being young, having fun, dating, and exploring the world and themselves.

Talking to the kids, I also realized I had to readjust my perspective because of their very different lives. I talked to one girl who asked me all the questions I would expect from a North American twelve-year-old: do you have a boyfriend? Do you have a tattoo? Do you have a car?

However, I realized I had to shift some of my answers. When I told her I had a husband, she asked why I didn’t have kids. When I told her I had a car, she was very amazed. When she asked where my family was from, I tried to explain that my mom lived in France and came to the U.S. to be with my dad, but I don’t think she had any way of knowing that France was so far away. She asked me if we could drive there to visit. Little comments and reactions of kids as I answered their curious questions was what stuck with me so much, and made me realize that our culture is very different from theirs.

There was one moment that I felt very clueless in the Guatemalan culture. It was at the hotel El Atlántico, and the waitress was taking my plate after I was done eating dinner. She smiled at me, and gave me what I interpreted to be a funny look. Then she said, “Buen Provecho!” with a lot of enthusiasm. I was a little disconcerted at first, because I thought she was making fun of my large appetite. I thought that saying buen provecho before dinner was a friendly way of saying, “dig in”, but saying it after a meal seemed like it meant “well gosh, you sure ate a lot”. But then I heard the waitresses saying the same thing to everyone else, and I realized it must mean more, “I hope you enjoyed your meal”. After my initial feeling of being taken aback, I realized it was just a misunderstanding, and I laughed about it with my companions.

Overall, this trip was so much more than I expected. It changed my perspective on the world, my own life, and what I can do to help others. It helped me grow so much as a person, and the Guatemalan people I met inspired me to try and be less selfish. I realized that no one has a perfect life; that the lives of the Guatemalan people may be less full of things than our life is, but that doesn’t always mean they have less happiness, and I learned that changing the world really does happen one person at a time. It was full of surprises and learning experiences. 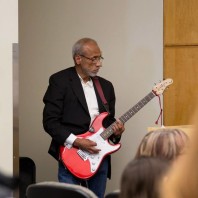 Last April, as one of the founders thirty years ago, Professor Francisco Manzo-Robledo was invited to give two talks at the Instituto Tecnológico de Chilpancingo, México. The topics were: 1)”Del romance español al (narco) corridor mexicano”, dealing with how Mexican corridos as products of Mexican culture, constitute a code for macho behavior. 2) “Tumulto del pulque de 1692”, dealing with Sor Juana Inés de la Cruz, the Viceroy and the Catholic Hierarchy during the fatal events of the indigenous uprising in the city of México and Tlaxcala a week after. The Institute is located in the capital of the state of Guerrero (where Acapulco is), which is currently going through the darkest period of violence in Mexico. Knowing that, Prof. Manzo-Robledo asked his group of students (Los Pacos) at WSU, to interpret a liberal translation of “Another Brick on the Wall,” so he could show the video as a salute to the students in the Institute: 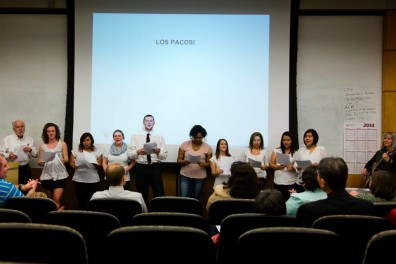 In 2013, Prof. Manzo-Robledo published a book in both English and Spanish about the same topic: “I, Hernán Cortés: His (Second) Trial of Residency”  [Peter Lang, 2013]; “Yo, Hernán Cortés: su (segundo) juicio de residencia” [Editorial Pliegos, 2013], which deal with a critical review of the documents in the Archivo General de Indias, in Seville, Spain, about the charges brought by the first Audiencia in Mexico city, against the conqueror of Tenochtitlan, Hernán Cortés.

This year Dr. Vilma Navarro-Daniels was invited by the dean of the College of History, Geography, and Letters at the Universidad Metropolitana de Ciencias de la Educación, Santiago, Chile, to give a scholarly presentation on her research about re-interpretations of Ancient Greek Mythology in Latin American and Spanish literature and film. The presentation will take place in December 2014. Her stay in Santiago will allow her to conduct research at the Centro de Estudios Clásicos Giuseppina Grammatico Amari at UMCE, which is a very prestigious and internationally renowned Department of Classics, in preparation for a book-length manuscript on the impact and influence that Ancient Greek literature and culture have in Twentieth and Twenty First Century Latin American and Peninsular Spanish literature and film.